Voices from the laundries 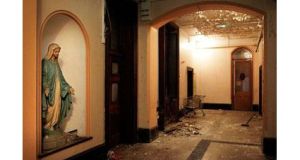 The interior of the now derelict Sisters of Our Lady of Charity Magdalene Laundry on Sean McDermott St in Dublin's north inner city. Photograph: Julien Behal/PA

“I was about 14 years old. You would get up very early, the van men brought it in. You’d check the customer of the dirty laundry, mark it and put it in baskets... We had to leave the room when the van men came. It was repetition all the time.”

“I thought I’d be there for life and die in there. I was frightened.”

“I was a young virgin, I don’t know why I was put there.”

“Two ladies were standing there [on admission], not nuns but dressed in navy. I was left with those two [then ordered to remove clothing and stand on a stool before being] punched by one of them, one side to another.”

“You couldn’t speak and needed permission for the toilet... The recreation time you were making beads and aran sweaters.”

“If you were talking you used to get a slap with a stick - get on with work.”

“If you had long hair it was cut... It was humiliating, making us feel like less of a person.”

“I remember a nun telling me that you came from an illegitimate mother. I suppose it was that you were no good and that’s why we were there.”

“The nuns looked down on me ’cause I had no father.”

“In the car the nuns were saying I had the devil in me, shaking holy water and saying the rosary in the car.”

“They would make you walk in front of all the women in the refectory and lie on the ground and kiss the floor.”

“It has shocked me to read in papers that we were beat and our heads shaved and that we were badly treated by the nuns...Now everything was not rosy in there because we were kept against our will... we worked very hard there... But in saying that we were treated good and well looked after.”

“There was never a reason given for anything, we never thought we’d see the outside of the world again.”

1 Explainer: Did the Taoiseach ignore public health rules by going on a picnic?
2 Miriam Lord: Leo’s Phoenix pecs just a storm in a bag of cans
3 Coronavirus: Need to move away from the ‘language of blame’ - Holohan says
4 Many Leaving Cert students likely to defer college places this year, says report
5 University of Limerick head resigns over personal Covid-19 health concerns
Real news has value SUBSCRIBE