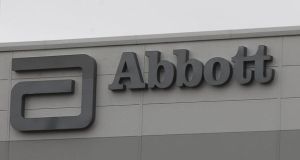 Abbott's Clonmel plant currently manufactures a range of vascular devices for global markets which are used in the treatment of vessel diseases of the heart and peripheral blood vessels. Photograph: Niall Carson/PA Wire

Over 200 jobs are to go at a healthcare manufacturing plant in Co Tipperary.

Staff at Abbott in Clonmel were told today that the company is seeking about 200 redundancies in its vascular manufacturing facility on the edge of the town, while “a few dozen” contractor positions will not be renewed when contracts expire at the end of March.

Abbott currently employs more than 1,400 people at its Clonmel site and the redundancies will follow a 30-day consultation period with employees. In a statement, the company said it hopes to achieve the redundancies on a “voluntary” basis.

“The proposed redundancies are part of adjustments we are making to meet the evolving needs of the business and to remain competitive in a challenging global environment,” it said.

The Clonmel site is to focus primarily on the manufacture of newer, advanced medication devices, according to the company, which incorporate a drug and device combination such as Absorb, which has been developed by Abbott for the treatment of coronary artery disease.

“Capital investment will be made at the site this year to enable it to manufacture these innovative medical technologies,” the company said in its statement.

“We regret the impact of this adjustment on our employees in Clonmel and the wider community, and our focus is on supporting our impacted employees. Favourable redundancy terms and outplacement services will be provided to affected employees.”

Abbott’s Clonmel plant currently manufactures a range of vascular devices for global markets which are used in the treatment of vessel diseases of the heart and peripheral blood vessels.

Clonmel is the only one of Abbott’s 11 locations across the country which will be affected by yesterday’s announcement. The company employs more than 3,200 people in Ireland.

The news was raised tonight in the Dáil by independent TD Séamus Healy who pointed out that the area had suffered other job blows recently with the closure of Kickham Barracks, St Michael’s psychiatric unit and a number of small employers around Clonmel and south Tipperary.

Fine Gael's Tom Hayes described the Abbott announcement as “extremely regrettable” and said his thoughts were with the staff “at this difficult time”. He said the Government was “working diligently” to stem the flow of unemployment. “We are starting to see that the plan is working. Last year we recorded an increase in employment in the private sector for the first time in four years.”

“News that 200 jobs are to go at Abbott will come as a big shock to workers and to the wider Clonmel community,” Mr Hayes said.

Fianna Fáil spokesperson on jobs, Dara Calleary, described the news as "hugely disappointing". Mr Calleary said his immediate thoughts are with the workers and their families.

“While the redundancies sought will be voluntary it doesn’t hide the fact that 200 workers will be out of a job in a matter of months. There are also an unspecified number of contract
positions with the company which will be lost when these aren’t renewed next month," he said.

“This again puts the Government’s much heralded but lame duck Action Plan on Jobs firmly into the spotlight. The latest progress report confirmed there is no serious commitment to job creation as there were no specific targets set for 2013," Mr Calleary added.

2:20 Trump-Fauci tension rises as virus cases soar in US

2:20 Trump-Fauci tension rises as virus cases soar in US

Cowen ‘surprised and disappointed’ after being sacked on the phone by Micheál Martin 06:57
Ornua to expand US cheese-making operation with $10m investment 06:46
Coronavirus: Florida battles against continued surge of cases 06:41
Pension age warning, flight cuts and a big day for the Apple tax case 06:33
Watchdog says retirement age should be 69 by 2040 to protect State finances 06:20