The best photographs of 2018: Arts and entertainment

Irish Times picks of the year: From a Galway moon to an Edinburgh contortionist 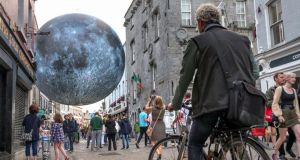 Cleo Royale’s creation for the Bank of Ireland Junk Kouture final in May, made entirely from cast-off materials.

Mike Humphrey checks on Fred, a recently completed Mesmer robot, built in Cornwall, in England, in May. Mesmer characters can be fictional, or faithful re-creations of real people.

Mónica Alvarez meets a gravity-defying Shane Houlihan in the Upside Down Garden at the 12th annual Bord Bia Bloom Festival, in the Phoenix Park in Dublin. Almost 120,000 people attended the festival, which took place over the June bank-holiday weekend.

Hanging around at the Royal Hibernian Academy, in Dublin, in May as final preparations get under way for the RHA 188th Annual Exhibition; 2,600 works were submitted, with 600 going on show.

In a tight spot with contortionist Odka, from Cirque Berserk, at the launch of the Edinburgh Festival Fringe in June. The world’s largest arts festival takes place in the Scottish city each August.

1 Man tested for symptoms linked to coronavirus in Belfast
2 A vegetarian and a non-drinker visit Ireland: here’s their verdict
3 Fintan O’Toole: Historians will not believe sheer ignorance of Brexit supporters
4 Child (4) died of viral infection following nap at Cork creche
5 Actor alleges Weinstein raped her: ‘I couldn’t fight anymore’
6 ‘I’m not going to go into any more detail’ - Varadkar faces drugs question again
7 Cycling or swimming, walking or yoga: What is the best exercise for you?
8 Who are Ireland’s 17 billionaires?
9 Chance of snow as Ireland set for cold snap from Sunday
10 Scotland’s Finn Russell missed training after Sunday drinking session
Real news has value SUBSCRIBE