Irish Times picks of the year: From Merkel and Trump to Meghan and Harry 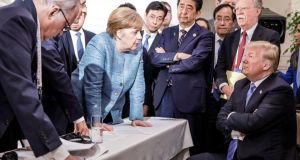 German chancellor Angela Merkel with US president Donald Trump (above) at the G7 meeting in Quebec, in Canada, June.

A Palestinian demonstrator who has just been hit in the face by a tear-gas canister fired by Israeli troops during a protest marking al-Quds Day, or Jerusalem Day, in the southern Gaza Strip in June.

An injured child is comforted after shelling in Douma, in Syria, in February.

Saleh Hassan al-Faqeh holds the hand of his four-month-old daughter, Hajar, who died in the malnutrition ward of al-Sabeen hospital, in Yemen, in November.

Rahima Khatun, a 30-year-old Rohingya mother of five, with her niece Taslima, whom she and her husband adopted after the death of the baby’s mother, Hasina, Rahima’s only sister.

An official opens the door to the Saudi consulate in Istanbul, Turkey, in October. The Saudi journalist Jamal Khashoggi went missing after visiting the consulate on October 2nd, to complete routine paperwork before his wedding.

Two girls on a fairground ride at the Eid in the Park celebration in London in August. The traditional four-day festival of Eid marks one of the holiest days in the Islamic calendar.

A Pegasus Airlines Boeing 737 sticks in mud after skidding off the runway at Trabzon Airport, in Turkey, in January. No casualties were reported.

Honduran migrants in the “caravan” heading to the United States, on the road linking Ciudad Hidalgo and Tapachula, in Mexico, in October.

Meghan Markle marries Prince Harry, of England, to become the duchess of Sussex, at Windsor Castle in May. This photograph was the overall winner of the News Media Association’s Royal Rota photography competition.

1 A Ryan Tubridy interview takes a terrifying twist
2 Returning from Australia, I barely recognise my hometown
3 Dublin house deaths: Three young children named
4 Ireland’s housing crisis in five revealing graphs
5 Des Bishop: ‘The last time my mother spoke was to say sorry’
6 David Clifford sends everyone back to their corners unbeaten
7 Irish explorer who discovered Antarctica honoured in home village
8 Shane Ross breaks fingers in fall at Marlay Park
9 Some get up early to go to the gym, others because they slept in a doorway
10 Brexit is a collective English mental breakdown
Real news has value SUBSCRIBE