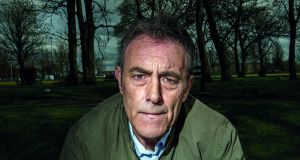 Ricky McDonnell appeared out of nowhere that April day, or so it seemed to me. Because of roadworks I was unable to meet at our agreed place, and had called him for new directions. Moments later, rummaging in the boot of my car for camera gear, he suddenly appeared beside me. My heart, which had started to race leaving Dublin earlier that day, now thudded even more loudly.

For the first time people would see the adult face of Ann Lovett’s former boyfriend. The circumstances of her death, in 1984, had been a mystery for more than three decades. Now Ricky McDonnell had agreed to speak to my colleague Rosita Boland, and this portrait was going to run with her exclusive story. The plan was to carry just one image, stronger and more powerful for being a single portrait. The photograph, although taken outdoors, had to protect against revealing where McDonnell now lived, so nothing in the picture could identify his surroundings.

I spent hours with him; it was the longest shoot I’ve ever done for one picture, with lots of chatting between photographs, trying to figure out his true expressions. This was a picture that needed to try to reflect something of McDonnell’s life experience in his face; to match the importance of the interview he had given.

Time was running out. Light was fading. We were among trees, and I was now using off-camera flash to add atmosphere and depth. In this portrait I feel his face comes dramatically into sight, out of a place of darkness in the same way his story did when it appeared in print.

Each May, in the middle of the night, thousands of people throughout Ireland, and worldwide, converge on villages and towns. Wearing the now familiar Darkness into Light yellow T-shirts, they walk or run to raise awareness of suicide, self-harm and mental health. Some arrive alone, some meet up with family and friends. As the crowds meander through streets and parks, they realise they are part of a very large community who derive strength and comfort from each other. Some walk in silence, some chat. As the new day dawns and the event comes to a close, some take the opportunity to write messages and leave photographs of loved ones on a remembrance wall. Unlike other gatherings I cover in my daily work, such as protest marches, this event is surely unique, in that so many people voluntarily get up in the middle of the night to support each other and remember their loved ones.

My photograph is of Jenny Attridge from Bantry, in Co Cork, arriving for a gala dinner at the Mansion House, which was part of Dublin Honours Magdalenes, a two-day event in June.

The event was organised by Norah Casey with the Dublin Honours Magdalenes group. President Michael D Higgins and his wife, Sabina, also hosted a reception at Áras an Uachtaráin.

Outside the Mansion House, people gathered to greet the women, many just wanting to shake hands. Many of the women were emotionally strained, crying together, yet the atmosphere was heart-warming.They arrived in waves, to shouts and tears.

Later, during a break from their gala dinner, some stood outside enjoying the warm friendship, and posing for photographs with Pauline McLynn, aka Mrs Doyle of Father Ted fame.

Snow brings out the inner child in me. Igloos, snowmen, tobogganing. Some can’t get to work, others can’t get home. For me it’s all part of my work. What a year for extreme weather 2018 was. Who would have thought we would need a hosepipe ban within a few short weeks of 3m snowdrifts?

Either way the extremes make for great photo opportunities. As Ireland shut down and bread became a tradable commodity, one brave couple forged ahead with their wedding-day plans in Trim, in Co Meath. My 40-minute trip became a three-hour slip and slide, as back roads ended in drifts. Eventually I arrived, just in time, as the women in the wedding party substituted wellies for high heels and a magic photo shoot in front of Trim Castle.

My favourite snow picture, strangely, happened in the heart of Dublin. The Beast from the East expelled its icy breath over Oisín Kelly’s Chariot of Life statue at the Irish Life building, transforming it into a frozen work of art. It was as if, all of a sudden, the fountain was on the receiving end of a Harry Potter wand.

I live in the Liberties, in the middle of Dublin, so walk to work, at the Irish Times building on Tara Street, at the other end of the city centre.

I walk down South Great George’s Street, where a couple used to sleep in a cardboard castle, but now it’s occupied by an individual. On to Exchequer Street and I pass a person waking up beside a bread delivery. I got to know a guy who slept on Exchequer Street who read that Morrissey was gay in a book on The Smiths and was shocked by the claim. He was a sound engineer who worked in Switzerland for close to a decade.

Depending on when my shift starts, the people who sleep on Grafton Street may have been moved on.

A man I got to know a few years ago shivers as he begs on College Green. He was diagnosed with HIV and is also on methadone treatment. I’m on to Townsend Street, where recent building work has moved a sleeping man to another, unknown location.

I arrive at work after a 25-minute walk.

Before the Liberties I lived in Stoneybatter, just across the River Liffey, and would come across fewer rough sleepers but far more used hypodermic needles on my way to work. I spent time with people working in a needle exchange who told me they wouldn’t wear light-soled shoes when walking in central Dublin.

In winter rough sleepers are cocooned in blue sleeping bags, shoes placed behind their torsos to keep safe. The hot summer meant some could go without the blue bags, exposed to the ground. That’s when I took this photograph.

In May I travelled with a colleague to Cox’s Bazar, in southern Bangladesh, for a story about the ongoing Rohingya refugee crisis. Heavy monsoon rains were expected to hit, so refugees were busy fortifying their bamboo-and-tarpaulin huts with rope and sandbags, while NGO volunteers and Bangladeshi soldiers worked to prevent roads used to transport food and medicine from being buried by mudslides.

During our visit we met several Rohingya who had travelled to the camp by boat and on foot from Rakhine State since August 2017, following a brutal crackdown on their Muslim-minority community by the Burmese military.

Among them was Rahima Khatun, a 30-year-old mother of five from Siddhar Para, a village in Rakhine’s Maungdaw district. As I was taking my shoes off at the door to her family’s dark, modest shelter, I could make out a tiny, wriggling creature on the floor. A moment passed before I realised it was a naked and severely thin baby covered in blotches. I had just come from a centre run by Concern Worldwide for malnourished mothers and babies, but I had seen nothing like this.

The baby was Rahmina’s niece Taslima, the child of her only sister, Hasina. Three days after giving birth, Hasina, just 20, died of excessive bleeding. Rahima and her husband, Mohammad, adopted Taslima, despite already struggling to feed their own.

Cradling the infant in her arms, Rahima described fleeing Siddhar Para with her family and neighbours after the village was attacked. “We were at home, and suddenly we heard a crowd screaming outside, and we found our home was burning.” They walked for 12 days to reach the Bangladesh-Myanmar border at the Naf river, foraging to stay alive.

Besides the tiny sick baby, the most striking image my camera captured during our visit was one of the walls in Rahima’s home. She had used the bamboo lattice to pin up her children’s crayon drawings – a startling reminder that life goes on.

May 26th, 2018. The Yes side win the referendum on whether to repeal the Eighth Amendment to the Constitution, which prohibited abortion, by 66.4 per cent to 33.6 per cent. Campaigners, politicians, media and members of the public gathered from early afternoon at the count centre at Dublin Castle. Then thousands celebrated the result in the castle’s main yard in front of the world’s media.

This photograph was made very late on that day, around midnight, beside the Bernard Shaw pub in Portobello. People who had attended the count, as well as people who had been out in town, were making their way home, and many ended up stopping at a mural created by the street artist Aches days previously. It shows Savita Halappanavar, whose death from septic shock and multiple organ failure, in 2012, after she was refused a termination despite being in severe pain and growing increasingly ill, brought Ireland’s stance on abortion back into the spotlight.

There was a real sense of reverence about the scene, and it was quiet despite its being on a busy road. It’s a buzzy part of Dublin, with pubs and takeaways, but it felt different on this occasion. People stopped at the mural. They hugged, they lit candles, left flowers, spoke quietly and respectfully and then moved on, to be replaced by others. I wanted to convey the sense of both stillness and movement, so made long exposures, of between 60 and 90 seconds, with the camera fixed to a tripod. The large orange stripe at the top of the frame is the elongated light trail from a bus driving towards Rathmines.

1 A Ryan Tubridy interview takes a terrifying twist
2 Dublin house deaths: Three young children named
3 Ireland’s housing crisis in five revealing graphs
4 Des Bishop: ‘The last time my mother spoke was to say sorry’
5 Returning from Australia, I barely recognise my hometown
6 Shane Ross breaks fingers in fall at Marlay Park
7 Brexit is a collective English mental breakdown
8 David Clifford sends everyone back to their corners unbeaten
9 Some get up early to go to the gym, others because they slept in a doorway
10 David McWilliams: A fall in house prices should be our goal
Real news has value SUBSCRIBE