Young people in Ireland among world’s most educated 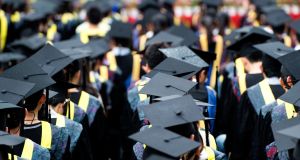 Young people in Ireland have among the highest levels of education in the world, according to a major new international study. Photograph: iStock

Young people in Ireland have among the highest levels of education in the world, according to a major new international study.

The Paris-based Organisation for Economic Co-operation and Development (OECD) report shows that 56 per cent of 25-34 year olds in Ireland had received higher or further education. The average for the OECD is 44 per cent.

11 Fintan O’Toole: Truth is Ireland’s vaccine against the Troubles

12 David McWilliams: Start building and don’t stop until we have all-island transport

14 ‘Rebuilding Notre-Dame is my reason for living. I must give her back to the world’

18 Analysis: After yet another talks impasse, what now for Brexit?

19 I spent a year testing eye creams: here is what works

22 Ross O’Carroll-Kelly: ‘One of your Three Wise Men stuck his middle finger up at me’

23 Viggo Mortensen: It ‘felt awkward’ replacing Stuart Townsend in Lord of the Rings

25 Val McDermid: ‘There will be a united Ireland within five years’

26 Jim McGuinness: Cavan need illogical courage and variety to down the Dubs

27 Jennifer O’Connell: Is it time woke culture was cancelled?

28 ‘Like talking to the president’: Macron’s go-to man for Europe

29 The history wars: A new battleground in Irish politics

31 Disappointing Nations Cup set for a finale of ‘farce’

32 Chinese in Ireland: Raising children away from ‘tiger parenting’

33 Walk this way: 32 walking routes to try, one in every county

34 Michael McDowell: Time to wake up and smell the coffee over Sinn Féin

36 Covid-19: Is Christmas really the problem?

37 Irish people should not stereotype the British, says President

39 Pride, passion and a bit of madness - football runs through Cavan’s soul

40 Evergreen: Johnny Sexton the latest Ireland outhalf to keep on keeping on