Body of woman in her late 20s found at emergency accommodation 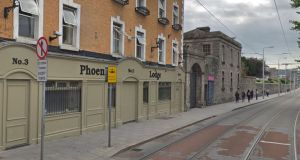 A young homeless woman has died “tragically” in emergency accommodation in Dublin.

In a statement to The Irish Times a Garda spokesman said: “Gardaí were called to the scene of a sudden death of a female in her late 20s that occurred at approximately 5pm at Parkgate Street, Dublin 8 on Wednesday, January 15th. A file will be prepared for the Coroner’s Court”

7 Letter from Saudi Arabia: ‘The Irish here are all in the same boat’

14 ‘I got a burning smell in my nose’: Third-wave Covid-19 patients share their experiences

16 Messi’s red-card outburst the act of a desperate, hopeless man

19 ‘I’m the meme queen’: A QAnon digital soldier marches on

23 Five habits learned during the pandemic that we should keep

24 Joe Biden’s presidential inauguration: Where can I watch, and what are the key moments?

25 Nuns who ran the Bessborough home in Cork sold part of site for €6.85m

31 Ireland is 13th most expensive place to live, survey shows

32 All in the Game: Glowing tributes few and far between for departing Özil