On the 40th anniversary of the Stardust nightclub fire, in which 48 people died and over 200 were badly injured, the families and friends of the victims gathered at the site of the former Artane nightclub to remember them. Video: Bryan O’Brien 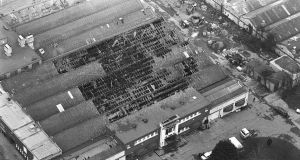 An aerial view of the nightclub after the fire. Photograph: Tom Lawlor

A tribunal of inquiry; a victim compensation tribunal; two Oireachtas-appointed reviews; countless political promises – none has brought peace to the families of 48 young people killed in the Stardust nightclub inferno 40 years ago.

On the eve of a grim milestone, however, the families now dare to hope. Fresh inquests, ordered by former attorney general Séamus Woulfe in September 2019, are expected to open later this year.

6 Davy Q&A: Who was involved, what happened and what is the likely fallout?

7 Oprah with Meghan & Harry: One by one the bombshells drop

12 ‘Do I have to do everything around here?’ Irish women and the ‘invisible job’

16 Pandemic savings: How some people have saved thousands by working from home

21 Womansplaining: Books that every man should read

22 Girl left scarred after falling into brambles at school secures settlement of €90,000

24 Stuff happens: Why you have so much household clutter – and how to get rid of it

26 Steady rise in number travelling further than 10km from home

28 Covid-19 Vaccine Tracker: What's available in the Republic of Ireland and what else is coming?

29 Portrait of 1916 nurse ‘airbrushed from history’ unveiled in Seanad

35 Minister to consult Cabinet over call for Rusbridger’s resignation

39 Roy Greenslade and the IRA: I was his editor. His admission raises hard questions

40 Smother: This is what an Agatha Christie-themed Glenroe looks like