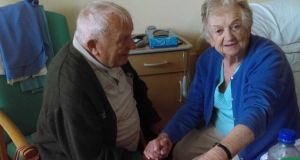 A couple who have been married for 63 years say they have been “separated” by the HSE after only one of them was admitted to a nursing home under the Fair Deal Scheme.

During RTÉ Radio’s Liveline on Monday the husband and wife became very emotional as one spoke to the programme from his nursing home, and the other from a hospital ward.

Their son Tom Devereaux said his elderly parents had applied to go to a nursing home under the Fair Deal scheme but the HSE had only accepted his father.

This meant that the couple, who have been married for 63 years, are now living separately.

His father, Michael (90), who has been in a nursing home in Wexford since early April, spoke to the programme and said he tries to get to see his 85-year-old wife as often as possible.

“It’s terrible, Joe,” he said. “I can’t sleep at night and wake a four o’clock in the morning and I pray and then I cry, Joe. We’ve been separated for the first time in our lives after 63 years of marriage.”

The fact, is, he said, “that we just love each other.”

He said it was a nightmare for him and he was sure it was for his “lovely wife”. He had been a loyal citizen all his life, he said, and hoped that something could be done. He said he was in a double room and the other bed was empty.

Kathleen Devereaux then came onto the show over the telephone and said she had been told she would have to appeal the HSE’s decision to refuse her access to a nursing home. She was calling from hospital, she said.

She said she wanted to go to the nursing home.

“I want to be with my husband.”

She said they had contacted the programme because they hoped it might be able to do something for them.

She would be 86 years old on Wednesday “and I hope we’ll be together.”

Tom Devereaux said his mother, who has been in hospital since late April, had been told by the HSE she was capable of living independently.

In a statement to the independent.ie website, a HSE spokesperson said it was “very conscious of the circumstances raised in media this afternoon”.

“The HSE can also assure the public that its Community Healthcare Organisation in the Wexford area will be liaising with the family concerned and will arrange to meet with them in an attempt at reaching a resolution as soon as possible.”

Garda Adrian Donohoe profile: ‘Big in heart with so much to live for’ 12:56
Aaron Brady found guilty of capital murder of Det Garda Adrian Donohoe 12:40
Covid-19: Restrictions an attempt to prevent State going back to ‘beginning’ 10:37
Sunny spells forecast with high temperatures of 26 degrees 09:02
A new species of dinosaur discovered on the Isle of Wight 08:38