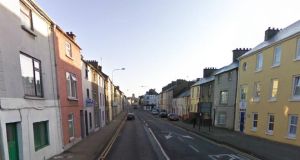 Minister of State for Equality Aodhán Ó Ríordáin said it was “completely and utterly wrong to tarnish an entire community” over concerns about criminality by some after anti-Roma protests took place on Manor Street in Waterford.

Anti-Roma protests in Waterford city over the weekend have been described as “cowardly, prejudiced and racist” by Minister of State for Equality, Aodhán Ó Ríordáin.

Mr Ó Ríordán was speaking after a number of families, including young children and elderly women, had to be evacuated from their homes in the city after upwards of 60 people gathered outside their house in the Manor Street area on Saturday evening, chanting “Roma, out, out, out”. Windows were smashed and a door was kicked in, it was reported.

“One male in his 40s was arrested for public order offences. He was later released without charge. A file is being prepared for the Director of Public Prosecutions,” he said.

Protestors said they were concerned about the alleged involvement of some members of the Waterford Roma community in crime.

There have been Facebook pages, including one titled ‘Get Roma criminal gypsies out’, where posts included: “Burn the cockroaches out” and “Throw them in the river” and called people “Roma c**ts”. This page was taken down yesterday and a new page was posted, titled ‘Make Waterford a safer place’.

It said: “ok lads this page is to be peaceful and not discriminate against anyone because if your found doing this you will be banned from the page as its not about who they are its about what there doing and what the gardai are doing to stop there crimes we need to stand up and show them we will not back down and be victims for there crime while gardai are protecting them (sic)”.

Mr Ó Ríordán said it was “completely and utterly wrong to tarnish an entire community” because of concerns about criminality by some.

“This sort of vigilanteism has no place in Irish society. My fear is that genuine concerns about crime are being whipped up and manipulated by unsavoury elements. They are targeting a vulnerable group, a soft target.”

Local Labour Party TD, Ciara Conway, called on anyone with concerns about criminality to bring them to the Gardai.

“There are many nationalities involved in street crime in Ireland, the Irish chief among them,” she said. “You wouldn’t find mobs gathered outside the house of an Irish framily if they thought they were involved in crime. The Roma are weak and marginalised.”

Sinn Féin senator from the area, David Cullinane, said events over the weekend were “completely unacceptable”.

“There can be no room in our society for rough justice. If anyone has information relating to allegations of criminality they should bring it forward to the appropriate authorities,” he said.

Gaby Muntean, a Roma community development worker, said the community were “very, very scared of what is happening”.

l An anti-racism rally will take place in the city on Wednesday evening at 5.30 pm in Railway Square.