A viral video shows hidden camera footage of a woman walking alone through New York City. In 10 hours of walking she is verbally harassed over 100 times. Video: Rob Bliss Creative 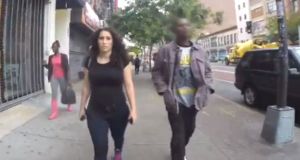 A viral video shows hidden camera footage of a woman walking alone through New York City. In 10 hours of walking she is verbally harassed over 100 times. 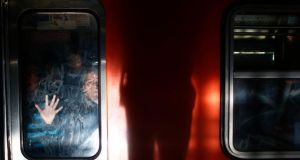 A video of a young woman being sexually harassed on the streets of New York has gone viral with over 5 million views in 24 hours.

Filmed secretly for over 10 hours by actor Shoshana B Roberts, the video was part of non-profit organisation Hollaback’s campaign to end street harassment.

Roberts has received rape threats in response to a video detailing the harassment, Hollaback said. There were more than 100 instances of verbal street harassment recorded during the 10 hours, not including countless winks and whistles.

In a two-minute video clip from the recordings, actor Roberts was instructed to smile, told: “Somebody is acknowledging you for being beautiful - you should say thank you,” and comments were made about her clothes and appearance.

At one point in the video a man walked alongside her silently for five minutes.

Another followed her and offered to give her his number.

“The rape threats indicate that we are hitting a nerve,” Hollaback director Emily May said. “We want to do more than just hit a nerve though, we want New Yorkers to realize - once and for all - that street harassment isn’t OK, and that as a city we refuse to tolerate it.”

The video has emerged as a new study ranked 15 major capitals based on how safe women consider their public transport systems to be.

New York, where the Roberts video was recorded, ranked highest with women there claiming to enjoy low levels of harassment and a general feeling of security and confidence.

The study carried out by The Thomson Reuters Foundations stresses the impact of a safe public transport system on women’s ability to successfully work and study.

Tokyo, with the largest urban population in the world, came in second followed by Beijing, and London. Some 6,500 women took the poll in Moscow, voting it the city with the worst public transport in Europe, due to women’s lack of confidence that the authorities would investigate a crime.

In Paris women’s votes showed a clear mistrust in the public’s help and assistance, ranking it the second worst city in Europe.

A safe public transport system has fast become a priority in many cities experiencing increased sexual harassment of women.

Both the survey and the Hollaback campaign point to the lack of legislation in the area of public sexual harassment.

The increased reporting of violence against women in urban areas over the past few years has prompted women-only sections on public transport in cities such as Jakarta, Kuala Lumpur, Delhi, Cairo and Manila.