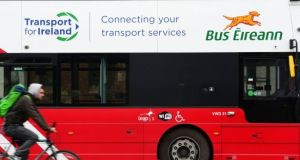 A spokeswoman for Bus Éireann said the company is facing insolvency by May. Photograph: The Irish Times

The prospect of a resolution to the industrial relations dispute at Bus Éireann is becoming “extremely difficult if not impossible”, the workers’ union has warned as Monday’s all-out strike approaches.

The National Bus and Railway Union (NBRU) told its members on Thursday to prepare for the “mother of all public transport disputes”.

“We think it only reasonable that we would alert people to the fact that the complexities of this dispute make reaching a resolution within the period between now and midnight on Sunday extremely difficult if not nigh on impossible,” said general secretary Dermot O’Leary.

Bus Éireann has said cost-saving measures at the centre of the dispute must be introduced on Monday as the company’s financial position is now critical.

Siptu and the NBRU said their members would stop work on Monday, the same day management indicated it would implement 55 measures – mainly involving work practice changes and new efficiency initiatives – aimed at tackling the financial crisis at the company.

There are concerns the dispute could spill over into other public transport services.

With time now running out to reach some kind of compromise, Mr O’Leary said: “We have today advised our members that they should put themselves on a war footing and be prepared for what will inevitably be the mother of all Public Transport disputes.”

The NBRU said it is prepared to engage on efficiency and work practice issues but that management at Bus Éireann “are determined to make a solution unattainable”.

“We remain prepared to engage towards playing our part in resolving the €9 million Expressway crisis, however we sense that the Bus Éireann management are geared towards maintaining its race to the bottom agenda of targeting savings of €30 million, which is not a space in which we will engage,” said Mr O’Leary.

A spokeswoman for the company said it is facing insolvency by May and that cost-savings measures must be introduced on Monday.

“The strike action threatened by unions will accelerate the crisis further and significantly discommode our customers,” she said.

“Bus Éireann management remain committed to re-engaging in WRC (workplace relations commission) talks to seek a solution and urge unions to do the same.”

This week, Minister for Transport Shane Ross restated that he would not intervene in the dispute and urged both sides to engage in negotiations without preconditions.