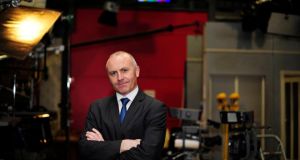 RTÉ’s head of television Glen Killane said it would have been “absolutely reckless” of the station not to settle the case. Photograph: Aidan Crawley

Taoiseach Enda Kenny has ruled out making RTÉ directly accountable to the Dáil in the aftermath of the payment of damages to John Waters and five members of the Iona Institute over a claim of homophobia on the national broadcaster.

This issue was raised in the Dáil yesterday by Fine Gael TD Jerry Buttimer, who said Minister for Communications Pat Rabbitte had no direct responsibility for RTÉ.

“Can I ask the Taoiseach if there any plans to make RTÉ directly accountable to the House here ?’’ he asked. Mr Kenny replied: “No.’’

The controversy arose out of the broadcast on RTÉ’s Saturday Night Show two weeks ago in which Rory O’Neill, aka Panti Bliss, named individuals he regarded as homophobic.

In an interview on RTÉ Radio One yesterday, RTÉ’s head of television Glen Killane said the €85,000 payout to John Waters and five members of the Iona Institute saved the broadcaster “an absolute multiple” in the long term. He said it would have been “absolutely reckless” of RTÉ not to settle the case.

“The amount of money you could be faced into shelling out potentially from six separate cases would have been a multiple for what we settled.”

Mr Killane said he spoke to senior management in RTÉ including the director-general Noel Curran before opting to pay out.He denied RTÉ would now be perceived to be a soft touch. “If we believe we have a case to defend, we will defend it as forthrightly and as vigorously as we possibly can, but we won’t do so recklessly.”