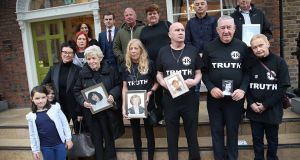 Victims’ family members at Buswells Hotel after the announcement that the Stardust blaze will be subject to a fresh inquest. Photograph: Stephen Collins/Collins Photos

The inquest three years ago into the 1989 Hillsborough disaster – in which 96 football fans were fatally injured in a crush at an FA Cup semi-final – was referenced several times by families at the Stardust press conference on Thursday as an example of what can be achieved when seeking accountability.

The coroner’s powers are severely circumscribed, however, and many families who go into the process optimistic of getting “justice” leave bitterly disappointed.

A coroner cannot consider civil or criminal liability, cannot apportion blame, and can only establish facts. An inquest establishes the “who, when, where and how” of an unexplained death.

Even within these narrow strictures the coronial process has been criticised as one where the odds are often stacked against grieving families – especially where they go up against bodies like local authorities, the Garda or Government departments.

As forums where facts – that may then be used in subsequent legal actions – are to be established, inquests can be hotly contested events where highly paid legal teams slug it out to ensure the facts established go on to protect reputations or challenge them.

As happened at Hillsborough, where the South Yorkshire police blamed working-class Liverpool fans for the disaster, so too in the aftermath of the Stardust the tribunal of inquiry suggested the fire may have been started deliberately.

In both tragedies the families rejected the smearing of the loved ones’ reputations and battled to have those narratives overturned.

The Hillsborough families won an inquest in 1991 at which the police renewed their case that drunken, ticketless fans were to blame. A verdict of accidental death was returned. An application in 1996 to quash that verdict was rejected.

In 2012 an independent panel highlighted myriad police failings and the 1991 verdict was quashed. After a two-year inquest, in 2016 verdicts of “unlawful killing” at Hillsborough were returned. In June 2017, six people were charged with various offences including manslaughter by gross negligence, misconduct in public office and perverting the course of justice for their actions during and after the disaster.

The forthcoming inquests at Dublin Coroners Court will see the official narrative of how 48 young people died, challenged in a court of law for the first time since the 1982 tribunal.

The families who jubilantly gathered in Dublin on Thursday will hope the parallels with Hillsborough don’t end there.