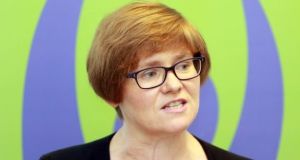 The number one priority for the Government post the coronavirus pandemic must be the delivery of SláinteCare and a single tier health system “based on need, not ability to pay”, the director of the National Women’s Council of Ireland (NWCI) has said.

Orla O’Connor, NWCI director, urged the Government to ensure supports and services introduced during the Covid-19 crisis remain in place once the health emergency has passed.

“In a crisis we reach for good ideas. A single tier health system, moves toward public childcare, increase investment in combating violence against women, an emergency rent freeze, an increase in the levels of social welfare have all be implemented in a number of weeks,” said Ms O’Connor. “We need to ensure these supports and services remain after the crisis to build a sustainable economy and tackle inequalities in our society.”

In a series of recommendations for the next programme for government published on Thursday, the NWCI called on the State’s leaders to build a society that “values our care and interdependence with each other” once the current health crisis has passed.

The NWCI’s A Feminist Future – Programme for Government 2020 notes that the State’s response to the Covid-19 pandemic reveals Irish people are “deeply committed to caring for each other”.

“There must be no going back,” said Ms O’Connor. “Before Covid-19 hit, we had the highest childcare costs in Europe, one of the highest rates of women homelessness in Europe, only one third our recommended refuge spaces for women fleeing violence, and a two tier health system based on ability to pay and not health need. Now, it is critical that our Programme for Government shows a real commitment to address these issues with long term solutions.”

The delivery of SláinteCare must be the “number one commitment” in the next programme for Government, she said.

“The implementation of Sláintecare must prioritise low-income and marginalised women including Traveller and migrant women and women living in homelessness, who have the worst health outcomes and access to care.”

The NWCI also called on the Government to increase investment in affordable, public childcare along with support for lone parents . This will be a “crucial” aspect of rebuilding Ireland’s economy and society, said the group.

The Istanbul Convention – a key international instrument in tackling violence against women – should be fully implemented with increased investment in frontline services, said the NWCI.

“The epidemic levels of domestic abuse are stark, as women face increased dangers while isolating at home with abusers. The current provision of one third our recommended refuge spaces has never been acceptable, and is even less so now in a time of crisis.”