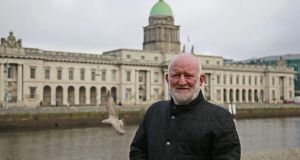 Sinn Féin has tabled an emergency motion for next week’s meeting of Dublin City Council calling for the immediate appointment of a new chair of the Housing Agency.

The party was responding to Minister for Housing Eoghan Murphy’s decision on Friday to reappoint Conor Skehan as chair of the agency for another year, after being unable to attract any “suitable” candidates to the role.

Mr Skehan has been criticised for comments he made in an interview with The Irish Times earlier this week, in which he suggested families may be “gaming the system” by declaring themselves homeless to jump up the housing waiting list.

Sinn Féin councillor Daithí Doolan, chair of the council’s housing committee, said the reappointment of Mr Skehan as chair of the Housing Agency was “wholly unacceptable”.

“His recent comments about homelessness and downplaying of the housing crisis have disqualified him for the job. We have no confidence in his appointment. His views are totally at odds with Dublin City Council and agencies tackling homelessness,” Mr Doolan said.

“We are in the midst of an unprecedented housing crisis. Conor Skehan’s victim-blaming is a smokescreen behind which those responsible can try and hide behind. What is needed is adequate funding to be released to local authorities for a massive council homebuilding programme.”

Mr Doolan said the party had submitted an emergency motion for Monday’s Dublin City Council meeting calling on Mr Murphy to immediately appointment a new chair of the Housing Agency.

Mr Skehan has served as the agency’s chair since 2013 and was due to step down on December 12th last.

Mr Murphy reappointed him until December 31st next, despite distancing himself this week from Mr Skehan’s comments on homelessness.

The Minister said he had “no evidence” to support Mr Skehan’s remarks.

Mr Skehan had previously said that the State’s housing crisis was “completely normal” and its level of homelessness is one of the lowest in Europe.

In a statement on Friday, the Department of Housing said Mr Skehan will be released earlier than the end of December, if a replacement can be found.

Mr Skehan told The Irish Times it was his understanding that nominees for the role had been chosen, but had turned down the offer. “The Minister and I are happy I remain to provide stability until this process is completed and a successor has been found.”

Fianna Fáil’s housing spokesman Barry Cowen has also said Mr Skehan should not have been reappointed as his comments in recent days were “disgusting, insensitive and over the top”.