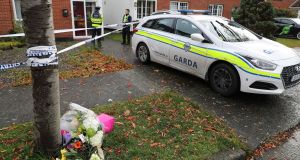 The Garda has said it was carrying out “a murder investigation into all the circumstances of the events” that occurred in the family home on Llewellyn Court, Ballinteer, Dublin, leading to the discovery of their remains in the house. Photograph Nick Bradshaw/The Irish Times

Gardaí strongly suspect the death of Seema Banu was a murder and sources said the inconclusive postmortem results on her remains would not prevent a suspect being charged with her murder and that of her two children, if incriminating evidence was found.

A postmortem established that Ms Banu (37) died as a result of ligature around her neck but was unable to determine if she took her own life or was murdered, though gardaí strongly suspect she was murdered.

The postmortems on the remains of her son and daughter – Faizan Syed (6) and Asfira Riza (11) – concluded they were murdered, with ligatures found with their remains.

The Garda has said it was carrying out “a murder investigation into all the circumstances of the events” that occurred in the family home on Llewellyn Court, Ballinteer, Dublin, leading to the discovery of their remains in the house. The bodies were found on October 28th, though Ms Banu and her children had been dead several days.

Experienced Garda investigators said murder cases based on circumstantial evidence had resulted in murder convictions. They pointed to the conviction last year of Pat Quirke (51) for the 2011 murder in Co Tipperary of Bobby Ryan (52), a DJ known as Mr Moonlight, and the conviction in 2015 of Graham Dwyer (48) for the 2012 murder of Elaine O’Hara (36).

While the postmortem on the remains of Mr Ryan found he died of blunt force trauma, they was disagreement between pathologists about how that was caused and the scene of his murder was never established. Only the partial remains of Ms O’Hara were found and it was impossible to determine how she was killed while the murder scene was also never established. While Dwyer is challenging his conviction, and the mobile phone evidence in the case may be effectively struck down, gardaí said that did not undermine the strategy of basing murder trials on circumstantial evidence.

“If you look the death of Seema Banu, we actually know more about her death than those other two cases (Pat Quirke and Graham Dwyer) in the sense we do have a cause of death and we also know when she died and where,” said one source.

He added while the postmortem could not determine if Ms Banu’s cause of death was self-inflicted or involved a third party, if circumstantial evidence showed she was murdered along with her children, as gardaí strongly suspect, then a suspect could be charged with three murders.

Garda sources said the murder investigation underway to establish how Ms Banu and her children died was focused on gathering small pieces of evidence to bring together, even if all of the evidence was circumstantial.

Detectives working on the murder investigation were, according to one source, working on a “deep dive” into Ms Banu’s life and state of mind in the last weeks and months of her life, with her friends and family in India set to be interviewed. Any threats she felt she was under, including a past alleged assault on her, were also being reviewed.

Gardaí were also focused on establishing who visited the house around the time Ms Banu and her children died there, with CCTV and phone records being reviewed. A similar focus would also be placed on any persons of interest, especially their movements around the time of the deaths and the contacts they had with other people in the days and weeks leading up to the deaths.