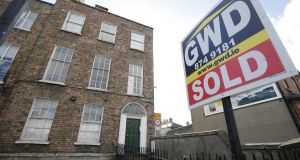 The last Dublin home of dramatist and socialist Sean O’Casey, where he wrote his best known plays, is being bought by Dublin City Council for use as homeless accommodation.

His daughter, Shivaun O’Casey, said housing homeless people would be a “very good use for the house” and something her father would have supported.

The house went on sale last year, and several heritage and cultural organisations, as well as Sabina Higgins, wife of President Michael D Higgins, have called for the council to ensure the preservation of the room in which O’Casey worked. Currently a faded wooden sign beside the front door reads “Sean O’Casey House”, but this is not visible from the public road.

The four-storey house was built as a family home in 1810, but was divided into tenement flats more than a century ago and until recently was in use as bedsit accommodation. The house has retained some of its Georgian features including an ornate fanlight and cast-iron griffin boot-scrapers and is on the Record of Protected Structures.

Lord Mayor of Dublin Nial Ring said it was his understanding that O’Casey’s one-room flat was “pretty much in the same condition as he would have left it”.

The council’s head of housing, Brendan Kenny, said the house “is currently in the process of being acquired by Dublin City Council in order to provide accommodation home homeless persons”. Once the sale had been finalised “we would clearly need to maximise use of all rooms in the property”, he said. However Mr Kenny said a “suitable plaque” could be installed.

Green Party councillor Ciarán Cuffe said he was glad that the council was buying the building and a plaque would be erected: “However more public housing would be the way to commemorate Sean O’Casey.”

Workers Party councillor Éilis Ryan said it may be possible that O’Casey’s room could be retained for “something educational for the people using the building”.

Independent councillors Mannix Flynn and Christy Burke said it was important the redevelopment of the house would be “handled sensitively”, given its cultural significance.