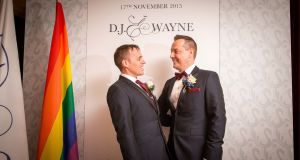 Wayne Gough and David James “DJ” O’Hanlon celebrated becoming one of Ireland’s first same-sex marriage partners with a hug and a kiss.

They tied the knot on Tuesday at one of Ireland’s most beautiful settings, overlooking Lough Eske at Harvey’s Point Hotel outside Donegal town.

The couple, who live in the little village of Lordship, near Carlingford, Co Louth, had a simple wedding before registrar Siobhan Duffy-Brown.

Mr O’Hanlon (41), an accountant, and Mr Gough (40), a ground-handling company boss at Dublin Airport, wed at a lakeside pier where they got engaged just over a year ago.

Mr Gough, a native of Glengormley, Co Antrim, said: “We have both been holidaying in Donegal for years. We have been together nine years since a friend introduced us in Belfast.

“Harvey’s has been on our agenda for a long time because we just love the scenery here.”

In September 2014, hotel staff quietly arranged a table and silver plate with champagne on the pier.

The pair went for a quiet walk in the moonlight, and Mr O’Hanlon was steered toward the pier where he thought the table was a “left-over” from a party in the hotel. Mr Gough eventually persuaded him to lift the silver lid off the top of the plate.

He did, and words written in chocolate said: “DJ, will you marry me?” At the same time Mr Gough dropped to his bended knee to repeat the proposal.

At that stage they didn’t know a referendum in May would give them the right to a same-sex marriage so they went ahead with plans for a civil partnership.

By the time the referendum was passed they had arranged for a civil partnership in Harvey’s Point on September 25th with 130 guests already invited so they went ahead with it.

However, the pair arranged for a quick full marriage before 30 guests when the final stages of the Marriage Bill 2015 became law yesterday.

They said when the referendum was passed in May they were both in Dublin Castle for the count and to be a part of the national celebration.

Their biggest disappointment is the Yes vote wasn’t law in time for their civil partnership ceremony on September 25th.

“But now it’s happened and we’re totally excited and ecstatic that we are married. We don’t know if we are first in Ireland but we are definitely first in the north-west,” Mr Gough said.

“Apart from today’s ceremony we plan to have another party for more guests later in the week. We want to keep the party going.”