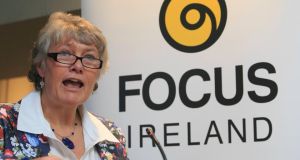 The number of families becoming homeless in Dublin has doubled in the last six months, a charity has warned.

With 16 families now losing their home every month in the capital, there are currently five children a week being made homeless in the city, according to Focus Ireland.

The charity said it had recorded an almost 20 per cent increase in inquiries from people across Ireland who have been made homeless, or were in fear of becoming so, over the last year.

The figure supported a total of 9,237 people so far this year who were homeless or at risk of losing their home, compared to 7,819 people during this same period last year.

The charity highlighted the problem as it appealed for public donations to help its work. It said it had been affected by State funding cuts at a time when demand was on the rise.

Focus Ireland’s director of fundraising and marketing Lisa Nicole Dunne said: “We are now seeing more people at serious risk of losing their homes due to the impact of the recession and it’s highly concerning to see the rise in the number of families becoming homeless.

“In Dublin alone the number of families becoming homeless has recently doubled from eight to 16 every month. Worryingly, five children a week are losing their family home.”

She added: “Focus Ireland will simply not be able to cope with the massive spike in demand for our services in to 2014 without public donations. Every euro counts in the drive against homelessness and people can rest assured 90 cents of every euro raised is spent directly on services to combat and prevent homelessness.”