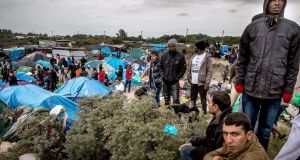 People at a site in Calais, France, dubbed the New Jungle, where some 3,000 have set up camp, September 21st, 2015. Most of them wish to reach England. Photograph: Philippe Huguen/AFP/Getty Images

Islamic cultural centres, churches and other religious groups can play a very important role in helping to welcome and integrate migrants coming to Ireland, Minister for Health Leo Varadkar has said.

“The people coming from Syria are a diverse group. Many will not be religious. Many are Christians. Many are Muslims of different types, but I think they will do as migrants always do - try to find someplace where they feel welcome or at home. Just like Irish people overseas. They go to a church or a GAA club or even to an Irish pub,” he said.

He was speaking to media on Thursday at the Islamic Educational and Cultural Centre in Dublin’s Blanchardstown, where he met members of the Muslim community as they prepared for prayers to mark the festival of Eid al Adha.

It was his second visit there.

He told the community he was “very aware that in the next year or two you’ll have many people who have had to leave their homes in Syria and other parts of the world who are coming to Ireland. I hope that you and the Government will work to make them feel as welcome as possible.

“ I know this Islamic centre has done an enormous amount of work already in raising donations for refugees in Calais and other places. I can see some of the donations here in the corner, upstairs, and in other parts of the building, and I think that’s a very generous act and something of which you should be very proud.”

Volunteers from the Islamic Centre at Blanchardstown brought two van-loads of donations to Calais last week.

Speaking to The Irish Times about the Calais visit, he said: “The experience was very emotional. I would never have imagined to see such scenes in western Europe, in France, a very wealthy country - scenes that we normally see on TV when we see reports of third world or developing countries where people are going through poverty.

“To see people in France going through the same situation and living in tents without proper shelter, without having basic necessities as food and clothing, it was very horrible, very emotional.”

At the Islamic centre, the first floor is currently full of donations, he said. “We are bringing a truck next week to Calais as well as to Germany”, to a migrant centre there where 300 people had recently arrived and which he had also visited last week.