Trócaire calls for support as lockdown restricts distribution of boxes 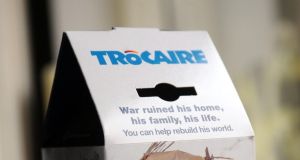 Trócaire says ‘the number of boxes sent to each parish has been reduced by up to 50 per cent’ this year. File photograph: Kim Haughton

Irish charity Trócaire has urged the public to continue supporting its “life-saving work” as its inability to distribute as many collection boxes due to Covid-19 restrictions leaves it facing a significant funding shortfall.

Its annual appeal begins on Ash Wednesday and raises about €8 million each Lent, amounting to roughly one-third of the overseas development agency’s annual donations.

However, pandemic restrictions mean this could be “the first Lent in almost 50 years when many homes will be without a Trócaire box”, a spokesman said. In any given year “about 900,000 Trócaire boxes are distributed, 150,000 to schools” with the rest collected mainly in churches, he said.

Last year, Lent began on February 26th, just before the first Covid-19 lockdown and “the problem then was not distribution of the boxes but their collection later on,” the spokesman said.

It meant that for a lengthy period “about €6 million, in 10 cent and 20 cent pieces, were resting in Trócaire boxes in people’s sitting rooms for a good while. People were asked to count the money and donate online, which they did,” the spokesman said.

Overall, last year’s Trócaire Lenten appeal was “just a little down on previous years”, he said.

This year, however, the agency’s main problem is getting boxes to people. They will be available in churches, which remain open for private prayer, and will be distributed to schools if and when they reopen.

However, “fundraising activities in schools, such as bake sales and talent competitions, will be severely curtailed this year”, the spokesman said.

“As Masses are not taking place, the number of people visiting churches is down. Travel restrictions also mean not all supporters will be able to access a church to pick up a box,” he added.

As a result “the number of boxes sent to each parish has been reduced by up to 50 per cent”.

Trócaire chief executive Caoimhe de Barra said “Lent is the engine that keeps our programmes going throughout the year” and she hoped the Irish people “will continue to support our life-saving work overseas”.

This year’s campaign “focuses on people who are trapped in long-running wars, such as those affecting places such as south Sudan and Somalia”, she said.

People unable to locate a Trócaire box this Lent can still donate to the agency online at trocaire.org or by phone or cheque.

They were chosen because of their work in global and local efforts undertaken to reduce the spread of Covid-19. The presentations will take place by Zoom on Wednesday.

The Óscar Romero Award, named after the bishop assassinated at San Salvador in 1980 and canonised in 2018, was established by Trócaire in 2018 to honour outstanding contributions to global justice.