Surviving mother-and-baby home nuns ‘should be questioned by gardaí’ 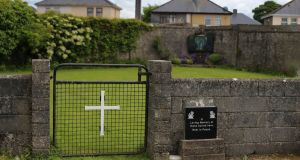 The site of the mass grave for children who died in the mother-and-baby home in Tuam, Co Galway. Photograph: Niall Carson/PA Wire

Nuns who presided over the running of the Bessborough mother-and-baby home in Cork should be questioned by gardaí, a woman who gave birth there 50 years ago has said.

Limerick woman Ann O’Gorman, who gave birth to her daughter Evelyn at Bessborough when she was 17 years old, has called on gardaí to question members of the religious order who are still alive.

Yesterday, she presented gardaí in Cork with extracts from the fifth report of the commission of investigation.

She gave birth in the summer of 1971 at Bessborough. She said she heard her baby cry but she passed out and when she woke three days later she was told the infant had died. She asked if she could see where her daughter was buried but she was refused.

She said her daughter’s death certificate lists the cause of death as prematurity, yet in another entry on the same document, the birth is described as “full term” and “normal”.

Ms O’Gorman said gardaí need to intervene in order to provide answers to the questions of women such as her.

“I was sick for a while but I will get up again and keep on fighting. If anything happens to me I hope my children carry it out for me. That they will get justice for my baby. I am very disappointed with the commission. It feels like they are going against us when we thought they were there for us.”

Meanwhile, a man who was in the Tuam mother-and-baby home until the age of seven has said he cannot get the image of babies “being thrown like rag dolls” into a concrete pit out of his mind.

“It’s just hitting me now,” said PJ Haverty, who was born in the home and lived there until he was fostered. “Since I read about the underground chambers and the remains found there, I can’t stop thinking about the poor babies being thrown like rag dolls, probably from a height as an adult couldn’t get down there and if you did, it was harder to get back up.”

Mr Haverty, who spoke to the commission of investigation twice about his experiences, said the latest report had brought other survivors out into the open.

Mr Haverty said he did not know Galway County Council owned the home, which was run by the Sisters of Bon Secours, or the land around it.

“That annoys me even more now. When skulls and bones were seen at the bottom of that concrete tank in the 70s, soil was brought and they were covered over. Nothing was done about it,” he said.

“And these were people who had taken an oath to mind and care for the poor. How could they treat anyone with such disrespect?”

He said he is still waiting for an apology for the way his mother was treated. She was forced by the nuns to leave the home when he was a year old. She took a job as a cleaner in a hospital in Tuam run by the same order of nuns but they refused to let her see him.

Mr Haverty said they eventually met years later in London but she died five years ago.