‘Titanic priest’ had been Irish Guards chaplain in Flanders 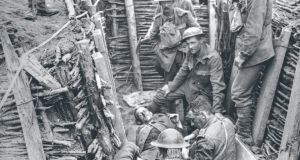 Irish Guards with a wounded man in a trench in Wytschaete, Belgium. Photograph: Fr Browne. 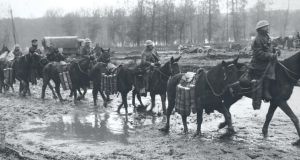 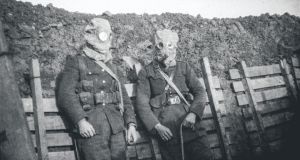 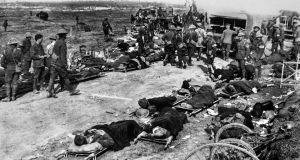 An ambulance station with men on stretchers in Ypres. Photograph: Fr Browne.

It was just after Christmas 1916 when Fr Frank Browne wrote from the front in Flanders to his Jesuit provincial in Ireland.

“On St Stephen’s Day the men were engaged in a football match when the Germans saw them. They sent over a lovely shot at long range which carried away the goal-post and, bursting in the middle of the men, killed three and wounded seven,” he wrote.

“The wounded were bandaged up and carried away to hospital and the dead were carried away for burial. Then the ball was kicked off once more and the game went on as if nothing had happened. The Germans must have admired the cool pluck of the players for they did not fire any more.

“This is just one little incident of the war, showing how little is thought of human life out here. It sounds callous, but there is no room for sentiment in warfare, and I suppose it is better so.”

Late Liverpool manager Bill Shankly would surely approve. He, famously, once said: “Some people believe football is a matter of life and death, I am very disappointed with that attitude. I can assure you it is much, much more important than that.”

In 1916 Fr Browne joined the Irish Guards as chaplain and served with them until spring of 1920. Wounded five times and badly gassed, he was awarded the Military Cross and Bar for his courage, as well as both Belgian and French Croix de Guerre.

While in Flanders, and later in occupied Germany, he took photographs and these graphic pictures are published in a new book Father Browne’s First World War, by Fr Eddie O’Donnell SJ.

Fr Browne is perhaps better known for pictures he took on the Titanic on the first leg of its journey in April 1915 from Southampton to Cobh , where he disembarked. It continued to the North Atlantic and its doom.

Francis Browne was born in Cork in 1880. He lost both parents early in life and was raised in Cobh by his uncle, Bishop of Cloyne Robert Browne, who also bought him his first camera. Among Fr Browne’s classmates at university in Dublin was James Joyce, who cast him as Mr Browne the Jesuit in Finnegans Wake.