May referendum ‘reaffirmed the importance of marriage and family for our society’, Fitzgerald says 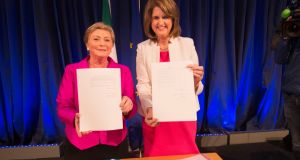 The signing by both Ministers order gives effect to the referendum of May 22nd last which approved marriage being available to same-sex couples. Such couples, including those already in civil partnerships, will be able to give notice of their intention to marry from Monday next.

As of round about NOW all Irish people can marry who they love regardless of their gender. Hurray for us! #MarRef

At the Dublin Castle ceremony Ms Fitzgerald said “the Irish people blazed a trail on May 22nd 2015 when they became the first sovereign people to choose marriage equality by popular vote. They determined that Ireland should be characterised by solidarity and inclusiveness. They have reaffirmed the importance of marriage and family for our society.”

Signing the order she added “it is a real pleasure to sign this order in the company of some of the couples who will be able to marry in the coming weeks and months. The Marriage Act has profound symbolic importance, but will also have a real and tangible impact on their family life.”

“The ICCL is profoundly grateful to Ailbhe Smyth of Marriage Equality and Kieran Rose of GLEN for their decades of dedicated advocacy in favour of full equality for same sex couples. The campaign stood on the shoulders of giants,” he said. “We should also like to express our appreciation for the sheer hard graft of Gráinne Healy and Brian Sheehan, especially during the last intensive weeks of the campaign, during which they served as co-directors of campaign operations,” he said.

“A small army of volunteers at headquarters and across the country truly brought the campaign alive and it is thanks to them - and everyone who voted yes in May 2015 - that marriage equality will become the law of the land on November 16th,” he said.