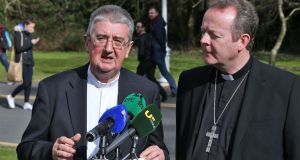 What the Irish same-sex marriage referendum showed “was a breakdown between two languages”, Archbishop of Dublin Diarmuid Martin (left) told the Synod of Bishops in Rome. Archbishop Eamon Martin of Armagh (right) said the synod should not forget “families which have experienced the trauma of abuse and domestic violence”. File photograph: Colin Keegan/Collins

The successful same-sex marriage referendum campaign in Ireland used language which was traditionally that of the church, Archbishop of Dublin Diarmuid Martin has told the Synod of Bishops in Rome.

“The referendum was debated within a social culture where people struggle to understand abstract moral principles. What they do understand is the predicament of individuals whom they wish to see happy and included.

“It is a very individualistic culture, but not necessarily an uncaring one. Indeed those in favour of same-sex marriage based their campaign on what was traditionally our language: equality, compassion, respect and tolerance,” he said.

Ireland, post-referendum, was “still marked by a very strong family culture. The numbers who get married - and who get married in church - are high, and divorce statistics are among the lowest in Europe. Families are strong and generous. That has not changed substantially,” he told the synod.

He continued: “Our young make their decisions on marriage and the family within the context of a flawed and antagonistic social culture. It is, however, not enough to condemn that culture.”

Simply “repeating doctrinal formulations alone will not bring the gospel and the good news of the family into an antagonistic society. We have to find a language which helps our young people to appreciate the newness and the challenge of the gospel.”

The synod had “to find a language which is a bridge to the day-to-day reality of marriage - a human reality, a reality not just of ideals, but of struggle and failure, of tears and joys.

“Even within a flawed social culture of the family there are those who seek something more - and we have to touch their hearts.”

What the Irish referendum showed “was a breakdown between two languages. It showed also that when the demanding teaching of Jesus is presented in a way which appears to lack mercy, then we open the doors to a false language of cheap mercy,” he said.

Ireland’s Catholic Primate, Archbishop Eamon Martin, remembered how Pope Francis had called on the bishops to be “revolutionaries of tenderness”. The Archbishop wondered at “how difficult it must be for some families to keep tenderness alive”.

The synod should not forget “families which have experienced the trauma of abuse and domestic violence, those for whom the proclamation of what we call the ‘good news of the family’ may mean little or nothing”, he said.

The church was sometimes “described as a family of families. We know only too well the horrific impact of sins and crimes of abuse in the church family: the betrayal of trust, the violation of dignity, the shame - both public and private, the anger and alienation, the wound that never seems to heal,” he said.

The synod’s working document needed “to reflect more openly these awful realities that afflict too many families today - families who ask: Where is God in all this? What of justice? Where do we find forgiveness? How does mercy and tenderness fit in?” he said.

He could “only imagine what it must be like for a mother and father to hold their newborn baby in their arms for the first time. My 87-year-old mother, who had 12 children, tells me, ‘Eamon, unless you experience it, you can’t explain it!’ ”

The unique tender love that unites husband, wife and their newborn child reflected the tenderness of God “and leaves an imprint which remains, even in the face of the awful realities that can feature in family life today - like violence, rejection, division, scandal, and hurt”, he said.