Primate led through ‘most turbulent period since the Penal Laws’ 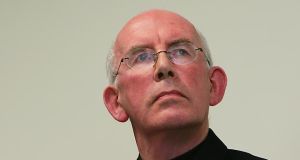 Cardinal Seán Brady: remains a cardinal for life and may take part in papal elections until he is 80. Photograph: Bryan O’Brien

Pope Francis has accepted the resignation of Cardinal Seán Brady as Archbishop of Armagh and Catholic Primate of All-Ireland. Coadjutor Archbishop Eamon Martin of Armagh automatically succeeds to both positions.

Cardinal Brady, who was 75 on August 16th, submitted his resignation letter in July, as every bishop must do so on reaching 75.

He remains a cardinal for life and may take part in papal elections until he is 80.

Credited with having contributed greatly to improved relations between the churches in Ireland as part of the Northern Ireland peace process, his role as leader of the Catholic Church in Ireland was damaged in recent years following revelations about his handling of a clerical child abuse inquiry in 1975.

In a farewell message at mass in St Patrick’s Cathedral in Armagh, he recalled Pope Francis’s motto “miserando atque eligendo” which he said “challenges and inspires me with its message of God having mercy and at the same time choosing us, despite our sinfulness”.

“It reminds me that I too need to say sorry and to ask forgiveness. And I do so again, now,” he said. “At the same time, Pope Francis’s motto inspires me to trust in the mercy of God and to pray for the strength to do always as Jesus would have me do.”

Yesterday he congratulated his successor and thanked the priests and people of Armagh and Ireland, as well as members of the other churches, for “their welcome, friendship and so much kindness over many years.”

In March 2010, it emerged that he took park in a 1975 investigation into allegations by 14-year-old Brendan Boland that he had been abused by paedophile Fr Brendan Smyth. As part of the process he swore Brendan Boland to secrecy as well as another boy he interviewed later in connection with similar allegations. The children’s parents were not informed nor were the civil authorities.

In many warm tributes yesterday, the Church of Ireland primate Archbishop Richard Clarke said the cardinal had been “a good friend to successive archbishops of Armagh and to the wider Church of Ireland throughout his archiepiscopate, and we are grateful to him for this unaffected generosity of spirit.”

“He chaired meetings with a gentle humility that has enabled rich dialogue and built understanding.”

Bishop Leo O’Reilly of Kilmore diocese, of which Cardinal Brady was a priest, described him as “a humble pastor of deep faith” who had “led the Catholic Church through our most turbulent period since the Penal Laws” and who “worked tirelessly to achieve peace in Ireland”.