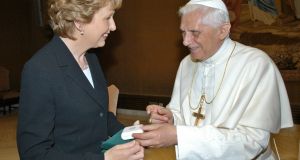 Then president Mary McAleese meets with Pope Benedict in the Vatican in 2005. Photograph: Osservatore Romano/Reuters

Concordats were very much in the air when then president of Ireland Mary McAleese met then Vatican secretary of state Cardinal Angelo Sodano on November 6th, 2003. On a state visit to Italy that week, protocol indicated she should also call on the Vatican.

At the time, the Catholic Church was in discussion with the Czech Republic over a concordat, a draft of which was rejected in 2003 by the chamber of deputies in Prague.

Its first article pledged both states to “mutually consider the other party an independent legal person in compliance with international law and they pledge to respect fully this legal personality”.

Ms McAleese has revealed that Sodano proposed something similar for Ireland at the meeting attended by her; Dermot McCarthy, then secretary to the government; and then Irish ambassador to the Holy See, the late Bernard Davenport.

“What he [Cardinal Sodano] was asking for was an agreement between the Holy See and the Irish government under which church documentation would be protected by the church and the State would, clearly, have no access to it. That was what he seemed to be saying,” she told The Irish Times.

She said she was “gratified to say it never was pursued but I think the thinking is indicative of what did happen”.

The Vatican complained to Dublin that the commission had not used proper channels, ie it had not gone through the Department of Foreign Affairs

Denial of access to church documents by Irish State inquiries, whether by accident or design, was to be an experience common to the Ferns inquiry, the Murphy inquiry (which investigated Dublin’s Catholic archdiocese) and the Cloyne inquiry.

In May 2001, the prefect of the Congregation for the Doctrine of the Faith (CDF), Cardinal Joseph Ratzinger (later Pope Benedict), contacted every Catholic bishop in the world, including then archbishop of Dublin Desmond Connell and then bishop of Cloyne John Magee.

He directed them to send all clerical child sex abuse allegations “with a semblance of truth” to him. On foot of this and prior Vatican decisions the Murphy commission wrote to the CDF in September 2006 seeking co-operation.

It got none. Instead the Vatican complained to Dublin that the commission had not used proper channels, ie it had not gone through the Department of Foreign Affairs.

The Murphy commission, however, could not use the Irish State’s “proper channels” as it was also investigating this State’s handling of allegations, as would have been known in Rome.

During its later investigations into Cloyne diocese it also wrote to the nuncio. This time the nuncio responded to say he was “unable to assist”.

Neither the Murphy or Cloyne commissions were provided with documents sent to Rome in 2001 from both dioceses dealing with credible allegations of clerical child sexual abuse.

Then there was the Ferns inquiry, set up in March 2003. In summer 2005 it had completed a draft report when a woman came forward alleging abuse by a priest of the diocese.

The inquiry team had not heard of this priest and inquired of then administrator of the diocese Bishop Éamon Walsh whether there was anything in their files on him. There was, but it has not been handed over.

That these files had not been handed over was described as a “regrettable error on the part of the diocese . . .”

In January 2008, former archbishop of Dublin Cardinal Desmond Connell went to the High Court to prevent his successor, Archbishop Diarmuid Martin, providing 5,586 documents to the Murphy commission which he (the cardinal) deemed confidential to him personally. He was persuaded, later, to withdrew the action and the documents were handed over.