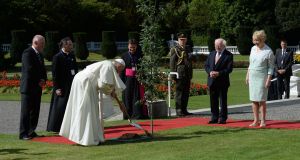 Syrian asylum seekers were among those in attendance when Pope Francis planted an Irish oak tree at Áras an Uachtaráin on Saturday.

The tree was planted near the spot where the last Papal visitor to Ireland Pope John Paul II planted a tree of his own almost 40 years ago.

Pope Francis was handed a ceremonial shovel by head gardener Robert Norris ahead of a ceremony observed by the Hassoun family, asylum seekers from Syria, as well as staff working in the Áras.

After planting the tree the pope spent a minute greeting each member of the family individually before making his way back into the Áras.

The pope’s cortège had arrived at Áras an Uachtaráin shortly before 11.30am as two helicopters buzzed over the Phoenix Park.

He was greeted by the President Michael D Higgins and his wife Sabina in front of a guard of honour made up of members of the Irish naval service. They were chosen to reflect the importance of the naval service in the ongoing Mediterranean operation aimed at disrupting the activities of people smugglers and assisting migrants to prevent loss of life at sea.

It was the third time President Higgins has met Pope Francis. They first met at the popes’s inauguration in March 2013 and more recently in May 2017 when the president visited the Vatican.

They chatted on the steps of the Áras before entering the building where the pope signed the visitors’ book.

His message in the book said: “With gratitude for the warm welcome I have received. I assure you and the people of Ireland of my prayers that almighty god may guide and protect you all. Francis”.

After that the pope and the president met briefly in private before continuing a long-standing tradition which has seen royals, Irish presidents and visiting heads of state plant ceremonial trees in the Áras grounds.

The tradition began in September 1853, when Queen Victoria planted the first of three trees and it was continued after Ireland’s independence with President Douglas Hyde being the first Irish president to put down roots in 1939.

Since then all presidents of Ireland have planted ceremonial trees and visiting heads of state have also been invited to do the same.

Pope Francis’ tree was planted in the same vicinity as the oak tree planted by Pope John Paul II on occasion of his papal visit in 1979.

Amongst the dignitaries in attendance at Áras were the Minister for Children and Youth Affairs Katherine Zappone, the ambassador of Ireland to the Holy See Emma Madigan, the Catholic primate of All Ireland Archbishop Eamon Martin, Archbishop of Dublin Diarmuid Martin and the Secretary of State of the Vatican Cardinal Pietro Parolin.

In a statement following the pope’s visit, President Higgins said that during their meeting they continued their previous discussions on a wide range of issues of mutual concern, emphasising the need for concerted international action to address the challenges of climate change, inequality, poverty, violent conflict and migration.

“The president and His Holiness spoke of their shared conviction that social cohesion, solidarity and human rights must be at the heart of political and personal responses to the current challenges facing global communities. The present and future generations affected by such challenges deserve an engaged response to their needs and to be given a basis for their hopes for a sustainable planet with an interdependent people. The president said that he shared the concern of His Holiness at the lethargy of the global response which His Holiness Pope Francis has called ‘the globalisation of indifference’.

“President Higgins referred to the important contribution made to the debate on the importance of connecting ecology, economics and ethics that was outlined by His Holiness in his ground-breaking encyclical, Laudato Si,” the statement said.

It added that President Higgins also spoke to the pope about the issues of homelessness, health, education and nutrition. “They both emphasised the importance of measures to prevent and redress all forms of abuse of privilege or power.”

The president also spoke to Pope Francis “of how the achievement of an equality of rights defined a Republic, and of how acts of exclusion, including those based on gender and sexual orientation, had caused, and were still causing, great suffering.

“President Higgins raised with His Holiness the immense suffering and hurt caused by child sex abuse perpetrated by some within the Catholic Church. He spoke of the anger which had been conveyed to him at what was perceived to be the impunity enjoyed by those who had the responsibility of bringing such abuses for action by the appropriate authorities and have not done so.

“The president welcomed the honest and forthright language that His Holiness used when addressing the issue in his recent Letter to the People of God. He conveyed to Pope Francis the widely held view that all would benefit from a set of actions that gave the necessary assurances to all citizens past, present and future, of all faiths and none.”