A peaceful vigil to coincide with the Papal Mass in the Phoenix Park took place in Tuam on Sunday. There was a procession from the Square in to the site where hundreds of babies were buried at the former institution. Video: Joe O'Shaughnessy 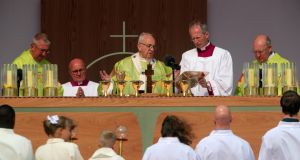 Pope Francis during the Mass at the Phoenix Park. Photograph: Colin Keegan/Collins Dublin

Pope Francis said last night he would “study” a memo given to him by Minister for Children Katherine Zappone about the Tuam mother-and-baby home in Co Galway.

“It touched my heart, that is why I wanted to repeat it during my speech [at Dublin Castle],” he told journalists on the plane back to Rome following a 32-hour visit to Ireland. On Saturday the Minister told him of the case involving more than 700 babies buried in a septic tank.

He said the proposal to ask for forgiveness during the Mass at Dublin’s Phoenix Park came from meeting survivors. They had expressed shock he knew nothing of Magdalene laundries and mother-and-baby homes.

Francis asked tens of thousands gathered in Phoenix Park for forgiveness for abuses in Ireland “of power, conscience, and sexual abuse perpetrated by those with roles of responsibility in the church”.

The pope told reporters last night: “I had never heard of these mothers, they call it the laundromat of women where an unwed woman is pregnant and goes into these hospitals, I don’t know what they call them, schools, run by the nuns and then they gave children to the people in adoption.”

“It was for me painful [to hear] but with the awareness that I have could help clear these things up.”

He was speaking at the end of a short visit to Ireland during which he publicly raised the issue of abuse on four occasions.

Francis found “much faith in Ireland. Irish people suffered for scandals, but there is faith. People can distinguish from truth and half truths. It is in process of healing ... but Irish people have faith, lots of faith,” he said last night.

Some 500,000 people were expected at the Phoenix Park Mass but the crowd appeared far smaller. Medical director of the site field hospital Dr Patrick Plunkett said he believed 130,000 people attended.

Asked about LGBT issues, the pope said: “What do I say to a father if the son or daughter has this tendency. Pray, don’t condemn. Understand, make space to let them express themselves,” he said. “ Silence is not a remedy.”

Last night he confirmed he had read the communiqué in which a retired Vatican diplomat called on him to resign, claiming he was aware of abuse allegations against a prominent church figure from 2013 but failed to act. “I believe the communiqué speaks for itself,” the pope said.