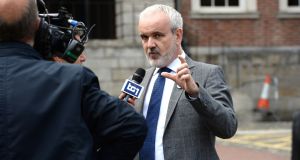 The Pope’s first speech on his visit to Ireland was “an incredible missed opportunity” to accept that the Vatican directed a cover-up of crimes, clerical abuse survivor Colm O’Gorman has said.

Speaking at Dublin Castle where he was invited to be in the audience for the pope’s speech, Mr O’Gorman told reporters that the speech was “a huge shame” and “rather disgraceful” in its failure to address the Church’s shortcomings on the issue of clerical sex abuse and its cover-up.

“We have the head of state of the Vatican City state here speaking in a public context. He could have talked to the people of Ireland beyond just those who might identify as faithful Catholics,” he said.

“He could have talked to us all in a way that was blunt, clear and frank, that was human and that was accessible. He refused clearly to do so and that’s a huge shame. I think frankly it is rather disgraceful.”

Mr O’Gorman said he had been taught as a boy by his parents and by his Church at the time that if he wanted to apologise for actions, the first thing he had to do was to take responsibility for them.

“It is staggering to me that in 2018 we are still asking a pope to take responsibility not for his own actions necessarily but for the actions of the institution that he heads,” he said.

“It is mind boggling to me that to ask a pope to tell the damn truth is a radical thing to suggest.”

All that Pope Francis needed to say was that the Vatican had “directed, implemented and instituted” a cover-up of clerical abuse including the rape of children, women and vulnerable adults and this was “underpinned” by its laws and done to protect the Church’s institutions, authority, power and money, he said.

Asked whether he had hoped the pope would announce new responses to tackle clerical sex abuse, Mr O’Gorman said the Church needed to take responsibility for the crimes and their cover-up first.

“If they don’t own and take responsibility of those crimes, the cover-up of those crimes by clergy, the protection of the institution rather than children and vulnerable adults - if they don’t do that, how can there be any integrity behind whatever actions they would announce?” he told reporters at Dublin Castle.

Former TV3 political correspondent Ursula Halligan, who spoke out publicly against the Church’s attitude towards gay, lesbian and transgender people two days before his arrival in Ireland, said she was “disappointed” and “underwhelmed” by the pope’s speech, believing he “could have gone much further.”

“To me, it sent out a message of business as usual. I thought that given the controversies that are raging in the Church, the Church is on the point of meltdown,” said Ms Halligan, who was also in Dublin Castle.

“It is in serious crisis and, unfortunately, the pope in his opening speech didn’t give any indicator that he was going to do anything different than he had.”

Ms Halligan said the Church has had “years to talk about the theory” but they have not followed up their words about clerical abuse with actions to introduce “systems of accountability.”

She listed off other actions the Church could take: “Deconstructing the hierarchy so that the system that allowed such terrible abuse to happen throughout the worldwide church would be closed down and new systems put in, systems of accountability so that what happened could never happen again.”

“We still don’t have that,” she added.

The journalist, who came out as lesbian before the same-sex marriage referendum in 2015, said she thought Taoiseach Leo Varadkar “nailed it” with his speech by not shying away from the “hot button” topics but did so with a tone that was respectful and diplomatic.

“He said, this is a new Ireland, a mature Ireland where he talked about family and that it came in all shapes and sizes and he mentioned lone-parent, grandparent and LGBT families,” she said.

“So he made his points cleverly, diplomatically and respectfully but he still made them. I think there was a lot of good craftsmanship had gone into it.”

Ms Halligan described it as “one of his finest speeches.”