Pope in Ireland: Homeless families ‘will not have to leave Dublin’ 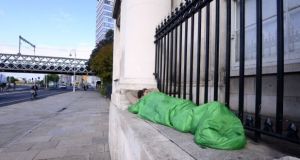 No homeless family will have to move outside Dublin during the Pope’s visit, the chief executive of Dublin City Council has said. File photograph: Cyril Byrne

No homeless family will have to move outside Dublin during the Pope’s visit, the chief executive of Dublin City Council has said.

“If others present as homeless, we will find accommodation for them.”

Mr Kenny denied that the Council is planning to move people out of Dublin as, had been claimed. “It will be a very last resort,” he told RTÉ’s Morning Ireland.

However, Anthony Flynn of the Inner City Helping Homeless group, said he had no faith in the council’s plans. “There’s going to be major strain on the city in the next few days,” he said.

He said the city does not have the capacity. “How they’re going to pull this off will be amazing.”

Mr Kenny said the council and homeless services had plenty of advance notice to set up plans. Hundreds of “spaces” have been reserved throughout the city, he said, such as offers from educational institutions and landlords with vacant properties awaiting sale.

He said it was unfortunate that from time to time the council did get caught short, as had happened in the case of Margaret Cash (28) and six of her seven children, who ended up sleeping on seats in Tallaght Garda station earlier this month.

“It is very tight, we can’t rely on hotels and bed and breakfasts now,” he said.

Mr Kenny was confident that outreach services in the city would still be able to provide their usual services on different streets to those closed off for the papal motorcade.