Pontiff addresses crowd of 82,000 at Croke Park at the end of the first day of his visit

Pope Francis with Ireland's President Michael Higgins and his wife Sabina Coyne during his visit in Dublin, Ireland, August 25, 2018. 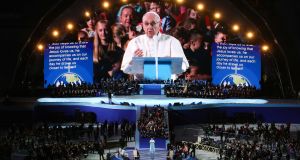 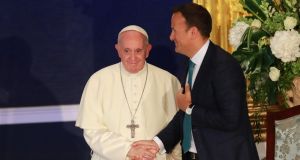 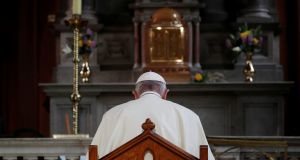 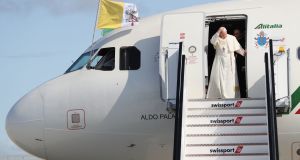 Pope Francis as he arrives at Dublin Airport, at the start of his visit to Ireland. Photograph: Brian Lawless/PA Wire 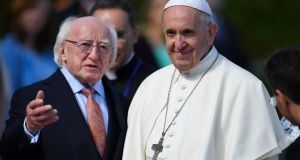 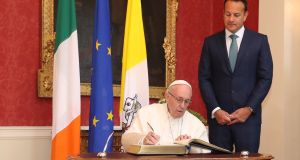 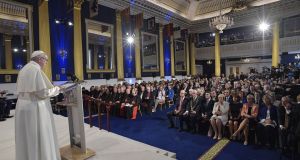 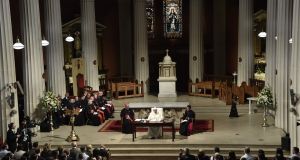 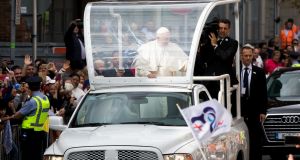 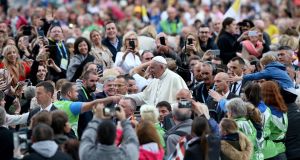 The pope has spoken of his pain and shame at the failure of Church authorities to tackle the grave scandal of clerical abuse in Ireland.

On the first day of his historic Irish visit, the pontiff said people had a right to be outraged at the response of senior figures in the Catholic Church to the “repugnant crimes” inflicted on young people.

In a speech at Dublin Castle this afternoon he also expressed hope that remaining obstacles to reconciliation in Northern Ireland could be overcome.

With the reverberations of a litany of church sex abuse scandals casting a shadow over the first papal visit to Ireland in almost 40 years, Francis confronted the issue in his address inside the castle’s St Patrick’s Hall.

“With regard to the most vulnerable, I cannot fail to acknowledge the grave scandal caused in Ireland by the abuse of young people by members of the Church charged with responsibility for their protection and education,” he said.

“The failure of ecclesiastical authorities – bishops, religious superiors, priests and others – adequately to address these repugnant crimes has rightly given rise to outrage and remains a source of pain and shame for the Catholic community.

He said the Church in Ireland had played a role in child welfare which could not be obscured. “It is my hope that the gravity of the abuse scandals, which have cast light on the failings of many, will serve to emphasise the importance of the protection of minors and vulnerable adults on the part of society as a whole,” he said.

The pope said he also wished to acknowledge women who in the past had “endured particularly difficult circumstances”.

The pope’s speech came after a private meeting with Taoiseach Leo Varadkar. During his own address at the event in Dublin Castle Mr Varadkar urged the pope to “listen to the victims”.

Hundreds of thousands of people are expected to welcome Francis during his whistle-stop tour of Dublin and Co Mayo over the weekend.

Upon his arrival in Ireland on Saturday morning senior Irish clerics and other dignitaries gathered at Dublin Airport to greet him and clapped as his Alitalia flight landed.

Irish and Vatican flags were flown from the cockpit windows as the aircraft taxied toward its stand. Pope Francis was greeted on a red carpet by Minister for Foreign Affairs Simon Coveney, his wife Ruth and their three daughters Jessica, Beth and Annalise.

The pope then met President Michael D Higgins at Áras an Uachtaráin, where he planted an Irish oak tree on the lawn. During the visit, President Higgins told the pope of the anger felt by those in Ireland who were abused as children by Catholic clerics.

Following the trip to Dublin Castle, the pope visited St Mary’s Pro-Cathedral on Saturday afternoon, before travelling through Dublin city centre in the popemobile.

At the cathedral he prayed for the victims of clerical sex abuse at a candle perpetually lit for those abused. He then addressed a congregation of young couples at the cathedral, telling them that the world needed a revolution of love.

“Getting married and sharing your lives is a beautiful thing,” he told them. He said older people have great wisdom, and joked: “Even the mothers-in-law, even they are wise.”

He also advised: “A marriage with no fights must be boring.

“If even plates fly and crockery flies, the secret is to make it up before the end of the day.”

As the popemobile passed City Hall, the crowd cheered and clapped, with thousands gathered on Dame Street to watch the pontiff pass by – waving and smiling – at a quick pace. He stopped briefly at Sean McDermott Street, where Pope John Paul II was scheduled to visit in 1979. However, the then pontiff famously failed to stop there after his popemobile fell behind schedule on its tour of the city.

Francis then visited a Capuchin centre for the homeless near Smithfield.

For his final stop of the day, the pontiff joined 82,000 pilgrims at a musical festival at Croke Park, where he was transported around the stadium in a mobile vehicle surrounded by members of his security team.

The pope was the star draw at the Festival of Families event, which saw performances from Daniel O’Donnell, Nathan Carter and Andrea Bocelli. The event also included a performance of Riverdance by 500 children from dance schools across Ireland.

The pontiff delivered an address at the festival and heard five testimonies by families from Ireland, Canada, India, Iraq, and Africa about the importance of family in the modern age.

During the address, the pontiff said social media should only be used in moderation as it can be “dangerous”, and it risks “imprisoning people in a virtual reality”. He said families should question whether they need to cut down on the time they spend using technology and instead spend more quality time with each other.

He also highlighted the difficulties some families, who have to flee their homes in search of security and peace, have to endure. “A family’s love and faith can be a source of strength and peace even amid the violence and destruction caused by war and persecution,” he said.

On Sunday, the Pope will fly west to Co Mayo, where he will follow in the footsteps of John Paul II and take part in a religious service at a holy shrine in Knock.

He will then return to Dublin for the closing centrepiece of the World Meeting of Families (WMOF) event – an outdoor Mass in front of an expected congregation of half a million people in the Phoenix Park.

While the pope is sure to receive a warm reception from the thousands who will attend events where he will be appearing this weekend, there will also be protests from those angry at how the Church dealt with the sex abuse scandals in Ireland.

Responding to the pope’s speech at Dublin Castle, victims advocacy group BishopAccountability.org said the pontiff’s remarks “gave little comfort to heartsick victims and Catholics hoping that he has a plan for ending the abuse and cover-up crisis.

“The pope again chose to commit to no specific solutions. Nor did he acknowledge his own responsibility for the crisis.”

Meanwhile, clerical abuse survivor Colm O’Gorman said the speech was “an incredible missed opportunity” to accept that the Vatican directed a cover-up of crimes.

Speaking at Dublin Castle, where he was invited to be in the audience for the pope’s speech, Mr O’Gorman told reporters that the speech was “a huge shame” and “rather disgraceful” in its failure to address the Church’s shortcomings on the issue of clerical sex abuse and its cover-up.

After his visit to the Capuchin centre, the pope met a number of abuse victims in a private meeting, as well as some people who spent time in industrial schools, seminaries and mother-and-baby homes.

The hour-and-a-half-long meeting took place at the Papal Nuncio’s residence on Dublin’s Navan Road. The pope reportedly referred to those who covered up abuse as “caca” – the Spanish word for “s**t”.

Widespread traffic restrictions will be in place across Dublin this weekend from Saturday morning to facilitate the visit of Pope Francis.

On Saturday, 52 roads were closed around Dublin’s city centre between 6am and 7pm as he attended events across the capital.

These road closures stretched from Patrick Street and Dawson’s Street to Cathal Brugha Street, Sean McDermott Street and King’s Street North. Dame Street, College Green and part of Nassau Street were closed, along with all streets leading onto O’Connell Street to accommodate the popemobile’s tour of the city.

A controlled access zone will remain in place around Dublin city until 11pm on Sunday. Some 86 roads, including all routes along the quays both north and south of the city and any streets in the vicinity of Phoenix Park, will remain closed from 8am-11pm.

The Pope arrived to a mix of cloud and sunny spells. Heavy bands of rain are forecast to pass over the country late on Saturday night, threatening a wet start at both papal destinations on Sunday, but they should have cleared up by the time the pontiff arrives. - Additional reporting - PA