More than 200 litter pickers worked through the night to clear all public routes, says OPW 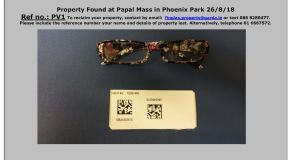 Some of the items left behind after the papal mass and which can be reclaimed from Garda lost property. Photograph: Garda Facebook page

Work began at 8 pm on Sunday evening, immediately after the site was fully vacated, according to park superintendent Paul McDonnell. The Office of Public Works said more than 200 litter pickers worked through the night to clear all public routes.

From Monday morning onwards, structures along the park’s routes were dismantled, including camera towers, barriers, and bunting. “We had to remove 500 metres of temporary ramps that were put in place for universal access,” said McDonnell.

With the help of Ryans Cleaning, an event cleaning company, massgoers were provided with a bin bag that helped keep the premises clean of rubbish. The company had over 300 staff members in Phoenix Park present at various times throughout the weekend, according to McDonnell.

Compliance with a no waste policy made all the difference, chief parks superintendent with the OPW Margaret Gormley found: “We operated a leave no waste policy for yesterday’s event and would like to pay tribute to those who attended and were extremely compliant in disposing of their waste in the recycling bins located around the site.”

Both Gormley and McDonnell credit the weather conditions for facilitating the quicker-than-anticipated clean-up process, and the park itself reopened at 4pm on Monday, having been closed from 7pm on August 24th in the lead-up to the Papal Mass.

The park is expected to be cleared of all infrastructure by September 9th.

Garda Síochána’s Facebook page has published a photo album with images of lost property from the event, including mobile phones, bank cards, and glasses.