Papal Mass: Organisers say prepare for ‘a lot of walking’ 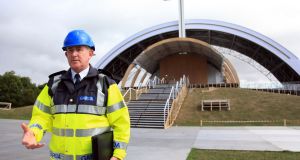 Assistant Garda Commissioner Pat Leahy at the Papal Cross in the Phoenix Park in Dublin where Pope Francis will celebrate a Mass for some 500,000 people on Sunday. Photograph: Garrett White/Collins

The organisers of Sunday’s papal Mass in Dublin’s Phoenix Park say those attending should be prepared to do “a lot of walking”.

About 500,000 people are expected to gather to see Pope Francis celebrate the Mass at the Papal Cross.

Selfie sticks, air horns, large umbrellas and alcohol are among the items that those attending will not be allowed to bring in.

Some 2,500 gardaí will be on duty on Sunday with about 700 of the officers to be based in the Phoenix Park for the Mass.

There will be facilities to check ticketholders’ bags but officers will only do so where appropriate, the force said.

Participants are also prohibited from bringing garden furniture, deck chairs, blow up furniture, folding armchairs, stools, flag polls or “any item which may reasonably be considered for use as a weapon”.

Animals, with the exception of guide dogs, are also not allowed at the event,.

Those attending are also advised not to wear helmets, protective headware or protective clothing.

Assistant Garda Commissioner Pat Leahy has said the terror threat level remains “moderate” for the pope’s visit. “Be very efficient in what you pack, a nice small bag is what we would prefer,” he said.

The event at the Phoenix Park will run from 8am until 8pm, with music and entertainment provided throughout the day for the large crowds expected to attend. The Mass is due to begin at 3pm.

“At a minimum you will be required to walk 4km to and 4km from the Mass and up to 7km to and 7km back, depending on where you are coming from,” organisers said.

Gardaí have advised those attending to take public transport to and from the event, which will be free for anyone travelling in the greater Dublin area who has a ticket for the Mass.