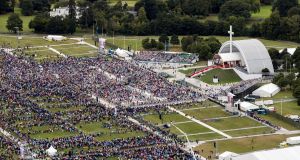 An aerial view of the crowd at Phoenix Park in Dublin as Pope Francis attended the closing Mass at the World Meeting of Families. Photograph: Liam McBurney-Pool/Getty Images. 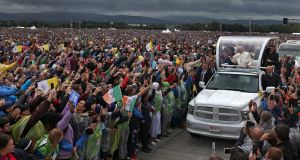 Pope Francis arrives at the Phoenix Park in Dublin for a papal Mass. Photograph: Colin Keegan/Collins.

An organiser of Sunday’s papal Mass in the Phoenix Park has estimated that 200,000 people attended the Dublin event, based on the amount of communion used.

Fr Damian McNeice said on Monday that the figure was an anecdotal “guesstimate” and that he had “no idea” of the actual number.

Dr Patrick Plunkett, the medical director of the site’s field hospital, said on Sunday that he believed 130,000 people had attended the Mass. Some 500,000 people were expected in the Phoenix Park Mass but the actual turnout on the day was significantly smaller. The Vatican had estimated the attendance at 300,000.

Asked on RTÉ’s Morning Ireland to comment on the numbers in attendance, Fr McNeice said the crowd was “way beyond my expectations”.

“I couldn’t believe the number of people that actually turned up yesterday” he said, citing the poor weather and heavy rain as reasons for people to stay home.

Fr McNeice said his estimation of 200,000 was based on the 370,000 communion hosts prepared for holy communion at the Mass, saying that more than half had been used during the event.

There were 1,000 doctors, nurses and paramedics in the park on Sunday along with 900 private security personnel, 500 gardaí and 500 members of the Defence Forces. More than 200 litter pickers worked through the night on Sunday to clean up all public routes in the park which re-opened at 4pm on Monday.

A further 45,000 people had been expected to turn up at the Knock Shrine in Co Mayo on Sunday to see Pope Francis. While a large crowd did brave the cold and rainy weather, a number of empty seats could be seen in front of the main stage as the event kicked off.

In Dublin on Saturday, crowds gathered through Dublin’s city centre to watch the Popemobile pass by as Pope Francis travelled between St Mary’s Pro Cathedral and the Capuchin Centre on Bow Street.

Assistant Garda Commissioner Pat Leahy had predicted last week that “up to 100,000” people would turn out for the pope’s tour through the city.

However, far fewer took the streets with crowds along the barriers lining the Popemobile route only one row deep in parts of the city.

Asked for an estimate on the number of people who travelled to the city centre to watch the Pope pass on Saturday, a Garda spokesman said the force no longer gives estimates on crowd numbers.

The spokesman also accused the media of over-focusing on the low turnout at papal events over the weekend and obsessing over numbers.

An estimated 80,000 people were present at the concert in Croke Park on Saturday marking the climax of the World Meeting of Families.

It is understood that an average 7,500 people per day visited the World Meeting of Families congress at the RDS last week.