‘In 1979, we were selling six or seven flags at a time, now I’m barely selling one or two’ 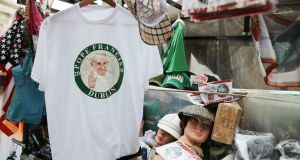 T-shirts of Pope Francis on sale in Dublin, ahead of this weekend’s visit to Ireland by Pope Francis. Photograph: Aaron Chown/PA Wire 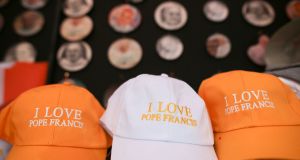 ‘I Love Pope Francis’ hats on sale in Dublin, ahead of this weekend’s visit to Ireland by Pope Francis. Photograph: Aaron Chown/PA Wire

Market stalls are out in force in Dublin city this week attempting to cash in on the more than half a million visitors expected for Pope Francis’ visit, but some say they are overstocked and undersold.

Hats, T-shirts, flags, dishes, scarves, badges, plaques, bags and even Pope Francis branded sweets and lollipops can be purchased from as little as €3 but stall owners say the price is not the issue.

“We haven’t sold very much at all, we’re overrun with stuff as we were expecting thousands of visitors, but no-one is buying anything.

“I was here for the last pope’s visit in 1979, we were selling six or seven flags at a time, now I’m barely selling one or two.

“Ireland isn’t the same place it was back then, people are not as interested in the pope and the church anymore, and who can blame them?

“In Dublin especially, people are fed up with the hypocrisy and the cover-up of abuse.

“I see the homeless people here every day, the church does nothing for them, day in and day out, and now they want them moved off the street for the Pope’s arrival, it’s hypocritical.”

Another seller said she did not think the city was any busier than on a usual day in August, and although she has received plenty of press attention, she is not pulling in profits.

“I’ve had photographers and journalists down here from Zimbabwe, Italy, South Africa, India, America — all over the place, everyone wants to take pictures of it, but no-one’s interested in buying it.

“I tried myself to get tickets for the Mass in Croke Park and I couldn’t get any, I’ve lived in Dublin all my life, and sell Pope merchandise on the street and I can’t even get tickets.

“I’d love to know where all these extra visitors are because they’re not around here.”

Both market stall holders say they are expecting business to pick up on Saturday as the city gears up for the Pope’s journey around Dublin via Popemobile.

Thousands of spectators are expected to turn out for a glimpse of Pope Francis in transit before he heads to The World Meeting of Families Mass in Croke Park on Saturday evening.–PA