Pope Francis on Sunday (August 26) asked for forgiveness for the "scandal and betrayal" felt by victims of sexual exploitation by Catholic clergy as he continued his tour of Ireland in Knock. 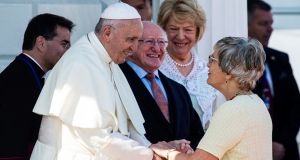 Pope Francis shakes hands with Katherine Zappone, Minister for Children and Youth Affairs, at a reception at Áras an Uachtaráin in Dublin. Photograph: Will Oliver/EPA

The pope and the Minister for Children clasped hands beneath the portico. As greetings go, this one went on far longer than protocol might require. What was Katherine Zappone saying to Francis and what was he saying in return?

Maybe she was filling him in on his next port of call: he was due in Dublin Castle after his formal meeting with President Higgins at Áras an Uachtaráin.

Zappone might have been telling him about how she proposed to her spouse – the late Ann Louise Gilligan – in the castle courtyard live on television as the results of the marriage equality referendum rolled in.

Or maybe she mentioned that she had been in the thick of things in that same Dublin Castle courtyard when the result of the abortion referendum was declared.

Whatever they were saying, it was enough to hold them in animated conversation for some time. Afterwards, it transpired that one of them was talking in Italian. And it wasn’t the pope. Zappone addressed him in the language of her forebears and Francis replied in English. The interpreters must have been mightily confused.

While the Minister’s people wouldn’t disclose what the two were talking about for so long, Vatican sources later confirmed that she raised the issue of mother-and-baby homes with him , in particular the scandal of Tuam, where historian Catherine Corless uncovered proof of more than 700 babies having been buried in a septic tank.

It was a glorious morning in the Phoenix Park on Saturday for the pope’s opening engagement – weather which Sunday’s pilgrims are praying will be repeated when they make their way towards the Papal Cross and their designated zones to hear the pope celebrate Mass at the same spot where John Paul ll spoke to more than one million faithful back in 1979.

The Áras dazzled white in the sunshine while flecks of silver sparkled in the Wicklow granite cobbles on the forecourt. This was a full pomp ceremony and a full-on event, with all manner of medals on parade, from long-service to miraculous, depending on your line of work.

The Army Number 1 Band played salutes while the guard of honour from the Naval Service was kept in line by Sgt Maj Stephen O’Neill from Kildare, his first time in the job. In terms of top brass, the Army band was hugely outnumbered by the high-ranking Garda and Defence Forces officers in attendance.

Zappone arrived out of the Áras first and there were “honours rendered”. This involves the guard of honour snapping to attention along with some jaunty fanfare. Then she went back inside.

The President and his wife Sabina then appeared at the main doorway and were escorted by the Defence Forces chief of staff to the bottom of the red carpet. Honours were rendered. Then they went back inside.

For some reason, everyone in the courtyard started talking in whispers. Finally, the Irish officials lined up on one side of the doorway and it was almost time.

A motorcade came around the curve of the tree-lined drive. The guard of honour stiffened. An overseas journalist launched into a live broadcast. “Today is a day of two halves,” she began, as two sleek black Mercedes cars followed by two shiny and expensive Mercedes people-carriers purred to a stop in front of the Áras.

Men in pristine priestly garb and men in well-cut Italian suits jumped out of the cars holding briefcases and folders. They melted away to the sidelines. Then the doors of the people-carriers were opened and out tumbled a mixed assortment of monsignors, bishops and cardinals.

Ah, for God’s sake, would ya touch the bleedin’ child!

Also in the mix was Cardinal Kevin Farrell, who rejoices in the title of “Prefect of the Dicastery for Laity, Family and Life” and a man who is unlikely to be on former president Mary McAleese’s Christmas Card list this year.

By the time the pope made his entrance, we counted 10 black soutanes and five skullcaps lined up on the opposite side of the doorway. President Higgins and Sabina materialised. Michael D, eschewing his tweeds, wore a dark navy suit by Dublin tailor, Declan Abrahams. Sabina wore a mint green dress by Irish designer Niall Tyrrell and accessorised it with a treasured favourite from her wardrobe – a handmade Irish lace crochet collar.

Katherine Zappone wore a cream dress by Helen McAlinden set off by a Coeur De Lion crystal and rhinestone necklace with beads in the colours of the rainbow flag – the international symbol of the LGBT community.

Meanwhile, more expensive motors shimmered to a halt and more well-cut dark suits emerged from them. Sticking out like a sore thumb in this convoy was a small blue Skoda. This incongruously modest mode of transport carried the most important passenger of the day – Pope Francis. Michael D and Sabina warmly greeted their guest.

Then they faced yet another guard of honour followed by the Irish national anthem and the anthem of Vatican City – an unexpectedly jolly tune.

After that, it was inside to sign the Áras’s visitors’ book and for a private chat between the President and the pontiff – this was their third meeting. They discussed issues of “mutual concern”, including climate change, poverty, inequality, migration and violent conflict. They probably threw in lots of Latin too, because they can.

Meanwhile, in the sunny garden, a family of asylum seekers from Syria joined staff from the Áras and the Phoenix Park. They waited for the pope to come out and plant a tree.

This is an Áras tradition – Pope John Paul ll planted an Irish oak nearly 40 years earlier and now it stands stately and proud in the grounds. Nearby is one planted by Queen Elizabeth. For ceremonial purposes, the tree is planted in an open area in front of the building, and then when everyone is gone and the conditions are right, it is transplanted into a permanent spot in the Áras grounds.

Head gardener Robert Norris handed over the ceremonial shovel and the pope duly shovelled. Afterwards, the pontiff headed for the staff and the Hassoun family – the moment the photographers had been waiting for.

Earlier, one-year-old Tala Al A’Araj, who was with his sister Lana (6), brother Aala (4) and parents Mahmoud and Hasba, had made numerous attempts to escape across the gravel, up the steps and into the building.

He was finally swept up into his mother’s arms, much to the disappointment of the photographers who wanted to snap him stumbling into the pope’s.

When the time came to meet the family – Michael D putting a steadying hand on the 81-year-old pontiff’s arm as they walked, the men in the billowing black cassocks crowded around the scene.

On the media riser, the photographers were beside themselves. This was one occasion when they couldn’t roar at their subjects. “Touch the baby! Touch the baby!” beseeched one, in a loud stage whisper. “Ah, for God’s sake, would ya touch the bleedin’ child!”

Tiny Tala was standing at his parents’ feet, bottle in his hand, looking up with big wide eyes at all the men in black.

For a moment, the Vatican officials parted and you could see a smiling Francis, all in white, place his hand on the toddler’s head. A man from the papal entourage gave the children pictures of the pope which he had in a box. Perhaps they were signed. When the children grow up, those glossy cards will be a special momento of their special day.

Then it was over. The President and his wife – she was overcome with emotion as she bade Pope Francis a fond farewell – waved the pontiff off.

While around the back, women from the Áras staff stood beside the young Irish oak and took turns to pose with the Papal Shovel.