Miriam Lord: Pope begs for forgiveness but years of inaction beg the question: why should we?

All smiles and plundering flowers, it was magnificent – for those who wanted to be there 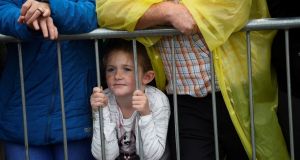 A child during the World Meeting of Families closing Mass in the Phoenix Park. Photograph: Clodagh Kilcoyne/Reuters 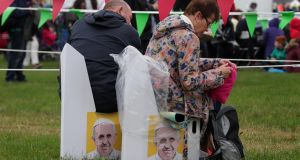 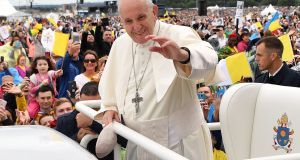 Pope Francis waves to the faithful as he arrives to lead the Holy Mass at Phoenix Park on Sunday. Photograph: Ben Stansall/AFP/Getty Images

At major public events, when a child is lost, it’s not unusual to hear an announcement calling for a parent to claim their little darling.

Not much hope of that in the Phoenix Park.

The crowd was in a ferment as Pope Francis prepared to celebrate Mass following a triumphant tour of the cheering faithful in his popemobile. But one little boy was lost. His name was Killian and the gardaí minding him reckoned he was about three years old.

Killian didn’t seem in the least bit worried because he was with members of the Ronanstown Community Policing Unit and they were about to give him a jaunt on one of their bikes and make him feel like a real policeman.

From where they stood, the crowd stretched far into the distance. How on earth would they find the little boy’s parents?

“Maybe the pope might make an announcement,” suggested Garda Colin Sullivan, with a smile. “Don’t worry, we’ll find them.”

We left Killian in good hands. “I’ve a little fella like him at home,” said Colin. “Everything will be grand. There’s a great spirit here. It’s the best event I’ve ever worked at – a credit to the organisers.”

But then, everybody who was there, wanted to be . You could see that in the faces of the pilgrims wending their way slowly through the rain to their designated zones . You could see it in the family groups from the Philippines or the hordes of mass-goers from Northern Ireland who had piled off buses at the crack of dawn and were now settling into their corrals with packed lunches and collapsible chairs.

There may not have been a special youth Mass this time, but there was a huge number of young people in attendance. Twenty young volunteers had come up the night before from Milltown in Co Kerry, bedding down for the night in a school in Clondalkin with students from other schools. 450 of them. And they had a céilí.

The Milltown group – volunteers from a Catholic schools’ organisation called Ceist – slept in sleeping bags on the floor of the maths room. “None of us got much sleep and we had to get up at half four,” said Kaitlyn O’Sullivan.

They wore green jackets and their job was to be “umbrella bearers for the priests” during the Mass.

Mind you, the aforementioned priests, battalions of them, were taking no chances in their custom vestments. They were also wearing plastic ponchos. It’s not a great look, but you couldn’t blame them.

Everyone said it was an awful pity – the weather. But what to do? It seems many decided not to do and stay at home.

Before Pope Francis left the altar, discussions were already starting about the size of the crowd. It would be nothing like it was in 1979, but everybody expected that. However, predictions of more than half a million were very wide of the mark. Then again, with potential pilgrims having been advised that the trek should be treated like climbing Croagh Patrick, it isn’t surprising that those not so sound of wind and limb weren’t going to chance the trip.

It seemed like every current affairs talking head who ever graced a studio microphone was providing commentary in the vast media area. Former tánaiste and leader of the Progressive Democrats Michael McDowell was walking around with an old green Catechism in an inside pocket, presumably with a matching blue constitution in the opposite one.

The Minister for Foreign Affairs came in for a cup of coffee before joining the VIP congregation. Simon Coveney was very proud of his three daughters who greeted the pope when he touched down on Saturday. However, Annalise (5), who was to present the floral bouquet, suddenly decided she was not going to do it. Point blank refused.

In the end she bargained her father up from a meal in Milanos, to a month’s use of his iPhone, to the use of his iPad and then finally, the jackpot.

She got what she wanted. “I’m thinking of bringing her to the next set of negotiations in Belfast. ”

There was very heavy security. Journalists who wanted to mingle with people had to be escorted in groups by government officials and a plain clothes garda. They were taken to a coral for a period off time and then brought back to base.

“But everyone is from Belfast,” wailed a disgusted Italian reporter. “What about all the other Irish?”

Best to wait until the main man had left the grounds and then you could do what you wanted. Everyone wanted to talk, particularly those who managed to plunder the floral display around the stage. People were leaving with armloads of foxtail lilies, carnations and mophead hydrangeas.

It was worse in 1979, when Mass goers were seen cutting up lumps of the red carpet to take home for souvenirs.

Marie Heraughty from Clontarf came with a large group from the Brosna club. She managed to snaffle a large amount of yellow roses but selflessly distributed most of them to her fellow pilgrims.

“The Mass was beautiful. I thought it was really lovely.”

She wasn’t worried about people who said the reduced numbers signalled a weakening of the church. “As the young people here told us: we are the future, not the past.”

And the past, along with the future, was captured lovingly by Cian Philpott from Cork city, a young man who was wheeling his 87-year-old grandmother from the ground, her walking stick protruding from his backpack.

The mere sight of the pope sent some people delirious. One woman, standing close when the popemobile passed, wept and blessed herself over and over. Despite the security, a lot of people managed to put themselves in the way of the vehicle, some almost flinging themselves at it.

When he passed the huge continent of priests, they all raised their arms in the air and did a synchronised jazz-hands salute.

It was a lovely occasion.

But not the same as before.

Forgive us, the pope begged the people of Ireland. Grant us forgiveness.

But after all the years of unacted upon apologies.