LGBT people made to feel like ‘lepers’ by Catholic Church 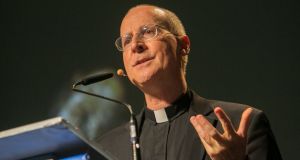 People from the LGBT+ community have been treated like “lepers” within the Catholic Church, a high profile American Jesuit priest has said.

Speaking at the World Meeting of Families festival in Dublin, Fr James Martin said gay, lesbian, bisexual, and transgender Catholics had been “deeply wounded” by the church. Fr Martin, a high profile Jesuit priest from New York, was delivering a talk on how the Church could be more welcoming to the LGBT community.

“LGBT parishioners have been made to feel excluded from the Church for so so long, that any welcoming experience can be life changing for them,” he said. LGBT Catholics were routinely “mocked, excluded, [AND]condemned” in their parishes, he said.

“They are as much a part of the Church as Pope Francis, your local bishop, your pastor, or anybody, it’s not a question of making them Catholic, they already are,” he said.

Fr Martin’s more liberal views are controversial within the Church, and a lay Catholic group had called for him to be removed from the speaker line-up for the World Meeting of Families event. The Irish branch of Tradition, Family, Property (TFP) had sent a letter to Dublin Archbishop Diarmuid Martin, asking him to remove the cleric from the list of speakers.

“Sadly many people still believe people choose their sexual orientation, despite the testimony of almost every psychiatrist, biologist, and the lived experience of LGBT people,” Fr Martin said, adding it was “not a sin to be LGBT”.

“Over the past few years I’ve heard some really sad stories from LGBT Catholics who have been made to feel unwelcome in their parishes,” he told the audience in the at-capacity hall.

“A 30-year-old autistic man who came out to his family, and was not in any sort of relationship, told me that the pastoral association said that he could no longer receive communion in the Church, because even saying that he was gay was a scandal,” Fr Martin said.

Fr Martin, who has family roots in Screen, Co Wexford, said Church goers had a tendency to fixate on the sexual morality of LGBT Catholics, and scrutinise them on whether they were following the Church teaching on sex and marriage, more closely than heterosexual parishioners.

The Church also knew “so little about the transgender experience,” and needed to listen to and better understand trans people, he said. Fr Martin received a standing ovation from the large crowd attending the talk.

Speaking at an earlier talk in the RDS, a Catholic academic and former politician Rocco Buttiglione, said being homosexual was “wrong.” Professor Buttiglione, of the Pontifical Lateran University, in Rome, Italy, was giving an address on family and marriage.

Prof Buttiglione, a conservative Catholic, said modern society did not “honour” motherhood as past civilisations did. Artificial contraception had severed the link between sex and the conception of children, he said.