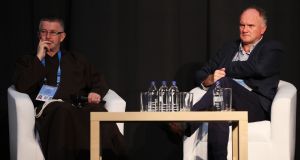 Fr Seán Donohoe, left, and Conor Hickey of Crosscare during a panel discussion on homelessness at the World Meeting of Families at the RDS in Dublin. Photograph: Brian Lawless/PA Wire

The homelessness crisis has reached “huge proportions” and a level that was “unheard of” three years ago, the chief executive of a social support agency run by the Catholic Archdiocese of Dublin has said.

Conor Hickey, of Crosscare, told the World Meeting of Families pastoral congress that the crisis was dominated by families becoming homeless due to economic factors they have no control over.

Traditionally people became homeless due to marital breakdown, mental illness, addiction or as a result of trauma or bereavement in their lives, but the shortage of available housing had changed this, he said.

“The current homeless crisis is defined by families or individuals who have none of those problems,” he said. “[They are] people very much like you or I who, because of economic factors beyond their control, have found themselves in a housing market where there are no available houses.”

Homelessness in Ireland was a topic for discussion at one of the first panel sessions entitled “No Room at the Inn: a Christian Response to Homelessness” at the pastoral congress of the Catholic Church’s six-day meeting.

Fr Seán Donohoe, co-director of the Capuchin Day Centre in Dublin, which provides breakfast to 300 people and dinner to 650-700 people daily, said an “enormous shortage of housing” had caused the homelessness crisis in Dublin. The pope is due to visit the centre on Saturday as part of his visit to Ireland.

“We have those who are obvious to us who sleep on our streets, in tents, in hostels, in emergency accommodation, in hotels,” said Fr Donohoe.

“We have others who still live at home way beyond the years of childhood and adolescence, who are young adults who cannot afford to buy or rent a home.

“There are people sleeping on sofas in friends or extended families’ homes. These too are homeless although not included in Government statistics because they are deemed to have shelter.”

Mr Hickey said the economic recovery was taking place “at the expense of the homeless and families” and had arisen due to the properties being repossessed by banks looking to sell them as vacant units to investment funds or so-called “vulture funds”.