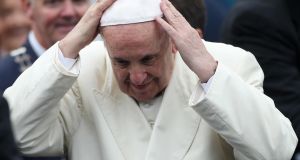 A former top Vatican official has accused Pope Francis of having known of allegations of sex abuse by a prominent US cardinal for five years before accepting his resignation. Photograph: PA

A retired Vatican diplomat has called on Pope Francis to resign, claiming he was aware of abuse allegations against a prominent figure in the church hierarchy from 2013 but failed to take action.

There was a “conspiracy of silence not so dissimilar from the one that prevails in the Mafia”, said Archbishop Carlo Maria Vigano (77), a former Vatican ambassador to the US.

The publication of the testament – which also contains a lengthy attack on homosexuality in the Catholic Church – is another sign of growing rancour and divisions within the Vatican and top levels of the church over Pope Francis’s papacy.

It came during the second day of the pope’s visit to Ireland, which has had a shadow cast over it by the ongoing abuse scandal.

In a highly-charged 11-page testament, Dr Vigano – who is known for his conservative views – claimed the pope knew Theodore McCarrick, the former archbishop of Washington, “was a corrupt man, [but] he covered for him to the bitter end”.

The former diplomat said he had an exchange with the pope in June 2013, three months after Pope Francis was elected, in which he told him there was a thick dossier on McCarrick.

According to Dr Vigano, the pope did not respond, and McCarrick continued in his role as a public emissary for the church. Dr Vigano named a string of cardinals and archbishops who he said also knew about the McCarrick claims. Last month, Pope Francis accepted McCarrick’s resignation as a cardinal after fresh claims he sexually abused an 11-year-old altar boy and seminary students. Pope Francis also ordered him to conduct “a life of prayer and penance” until accusations against him were examined in a church trial. McCarrick (88) has maintained that he is innocent.

Dr Vigano called for the pope to step down, saying: “In this extremely dramatic moment for the universal church, he must acknowledge his mistakes and, in keeping with the proclaimed principle of zero tolerance, Pope Francis must be the first to set a good example to cardinals and bishops who covered up McCarrick’s abuses and resign along with all of them.” ,

Tonight on his return flight to Rome, Pope Francis was dismissive of Dr Vigano’s claims. He said “ I read the communiqué this morning.”

He advised the journalists present “to you and all of you who are interested, you read carefully that communiqué and you make your own judgment.

“I will not say a single word about this."