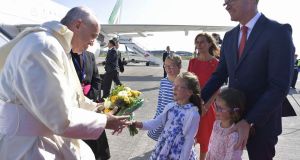 Pope Francis receiving a bouquet of flowers from a daughter of Minister for Foreign Affairs Simon Coveney at Dublin airport. Photograph: EPA

Clerical sex abuse was addressed “frankly” by the Taoiseach and Pope Francis in their speeches but there had to be “follow-through” to identify those who covered it up, Fianna Fáil leader Micheál Martin has said.

Asked about the remarks by the pope in which he referred to the “repugnant crimes” of abuse, Mr Martin told reporters he would have liked to have heard more about the measures the Vatican intended to take.

“We would have appreciated a greater focus on the actions that should follow,” said Mr Martin outside Dublin Castle after hearing Taoiseach Leo Varadkar and Pope Francis speak in their first public remarks of the pontiff’s visit to Ireland, the first by a pope since 1979.

“He was quite clear in his condemnation of clerical abuse and the failings of the church in terms of abuse of children by church members but I do think that there needs to be follow-through in terms of who was responsible for the various cover-ups, for the policies of shifting the abusers to different parishes and different locations where the abuse continued. That has to be completely open and frank,” said Mr Martin.

The Fianna Fáil leader said there had been much progress made by State and Church in the modern era but there were “a lot of people still suffering.”

He referred to people abused in primary schools who have no access to redress schemes.

Tánaiste and Minister for Foreign Affairs Simon Coveney thought the speeches were “powerful” and “a very good start to what will be, I think, an impactful weekend.”

“The Taoiseach spoke very very well summing up the challenges both for the State and the Church in Ireland and I think the pope responded appropriately,” he said.

Mr Coveney said he was very proud to introduce his family to the pope as he stepped off the plane at Dublin Airport and felt it was “appropriate” that he be met by a family when he was in Ireland to attend the World Meeting of Families, the once-every-three-year conference sponsored by the Vatican.

“Getting flowers from a seven-year-old girl when you land on a runway in Ireland is a very nice way to start what is going to be a hugely busy and energy-sapping visit to Ireland so I hope he felt very welcome when he stepped onto the runway,” he said.

“I thought [the abuse] was wrong at all levels, both locally and nationally, that it had to be cut out totally and absolutely, and that’s what his policy is and that’s what he is trying to do to make sure that these things never happen again. So that’s all a man could do,” Mr Ahern told The Irish Times departing Dublin Castle.

Mr Ahern thought the Taoiseach’s speech was “very good” particularly “where he acknowledged the huge role that the Catholic Church had played since the foundation of the State, what has made us and at the same time acknowledging the problems that are there. I think that was welcome.”

He said he had “no problem” with Mr Varadkar’s call for “a new covenant” between the State and the Catholic Church for the 21st century that would involve greater diversity and choice in the patronage of schools and where publicly funded hospitals were imbued with a civil and scientific ethos.

Mr Bruton said he felt the pope made “a very firm statement” on clerical sex abuse and the Church’s handling of the scandal.

He did not think that people ought to expect or did expect that the pope would address the issue of whether the Church had gone far enough to deal with the management of clerical sex abuse during his visit.

“I have no doubt those issues will be covered in future, that the Church has learned some very difficult and necessary lessons, and will draw on those lessons for the future,” Mr Bruton told reporters.

“But we are talking mainly about events that unfortunately happened in the past. The child protection policies in this country are very well worked out and very well enforced.”