Domestic abuse victims told their ‘reward would be in heaven’ 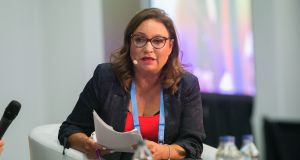 Norah Casey chaired the discussion on domestic violence during the World Meeting of Families at the RDS, Dublin. Photograph: Gareth Chaney Collins

Women who were the victims of domestic abuse were told by their clergy that it was part of their sacrifice in this life and they would get their reward in heaven, the World Meeting of Families was told.

Prof Monica McWilliams, one of the founders of the Women’s Coalition in Northern Ireland, said some Catholic clergy had been complicit in the past in giving domestic violence victims the impression they were the authors of their own misfortune.

She had also been told by a member of the Free Presbyterian Church that domestic abuse legislation should extend only to married couples and not to couples living together outside marriage.

The politician, whom she did not name, told her when she tried to introduce domestic abuse legislation in the Northern Ireland Assembly: “For those who choose to co-habitat, there should be consequences.”

Dr McWilliams told a discussion on domestic violence that “those days are over”.

She spoke of two identical studies she carried out in Northern Ireland into domestic violence. The first in 1993 was during the Troubles; the second was carried out last year.

Each consisted of three-hour interviews with 100 women who had been victims of abuse, and also interviews with those who had tried to help them, such as police and priests.

Women often blamed themselves for being victims of domestic abuse. “I heard it over and over again, ‘you make your bed and you lie in it’,” she said.

“That was told to them by their neighbours, by their friends and by their church. We internalise what is told to us. Anybody who has been bullied knows that.”

She added, however, that attitudes to domestic violence had changed in the past 25 years but there remained a “stigma” as many women feared they would not get a “non-judgmental response to what had happened to them”.

She pointed out that attitudes to domestic violence had changed in Uganda, which has 30 million Catholics, because of a public awareness campaign.

“If that is possible for the Catholic Church in Uganda to do, let’s try something like that in Ireland,” she said.

She suggested that all faith communities should be involved in stopping domestic violence. “Let’s get the message out there that this is criminal as well as sinful and it has to stop.”

The discussion on domestic violence was chaired by businesswoman Norah Casey who went public last year on how she had been the victim of a violent husband.

Ms Casey said she had fallen in love with a man named Peter when she was in her 20s and he was in his 40s.

He had broken three of her ribs and taken a knife to her throat. He also hit her in front of her parents. She finally decided to leave him.

Since going public she has spoken to other domestic abuse victims including some well-known people. Many shared similar stories to her. “Their own stories were reflected in mine. The one thing that resonated with me is that people asked me why did you stay.”

The critical question she suggested is how she had the courage to leave.

“So often victims of domestic violence remain silent. There are very few people who are able to talk about their stories. Their stories become misunderstood.”