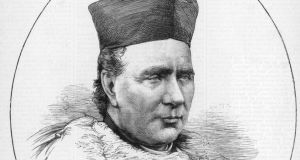 Cardinal Paul Cullen, one of the chief architects of modern Irish Catholicism, was an indefatigable reformer of the governance and practice of Irish Catholicism. Photograph: Hulton Archive/Getty Images

‘What was it in Irish Catholicism that led to such a level of harshness?” That, in his own words last week, is the question the Catholic Archbishop of Dublin Dr Diarmuid Martin asks himself. The answers snake their way through the public and private archives of modern Irish history and it is timely this weekend to highlight some of the roots of the authoritarianism, distrust, pessimism and class prejudices that became intrinsic to institutional Irish Catholicism as it emerged from the discrimination of colonisation and penal laws.

As Martin recognises, those who were victims of the church’s worst excesses were in the main “poor and vulnerable”. The church’s approach to these people was a mix of charity and snobbery. One of the chief architects of modern Irish Catholicism was Cardinal Paul Cullen. An indefatigable reformer of the governance and practice of Irish Catholicism, he convened the Synod of Thurles in 1850 and the common factor in all his exertions was obedience to Rome rather than to Ireland.

While Cullen was appalled by the poverty of his era, which he frequently denounced, this, according to historian Ciaran O’Connell, was “focused more on an appeal for compassion from the oppressors of the poor rather than a call for justice for them”. It was a crucial distinction.

Cullen sought religious and class segregation in the education system and was obdurate about the need for denominationalism and a limited curriculum for poorer Catholics, as “too high an education will make the poor oftentimes discontented and will unsuit them for following the plough or for using the spade . . . the rich must have schools for themselves and learn many things not necessary for persons in a different state of life”.

Cullen also created aspects of the governance and style of an Irish Catholicism that was rigid, lacking sufficient humanity and subservient to Rome, while at Maynooth College during that era, seminarians were imbued with a rigorist view of morality and Jansenism, emphasising the dark side of human nature.

The social, political and military upheavals in the decades after Cullen’s death in 1878 witnessed a church that was increasingly assertive and demanding, but also vulnerable because of the difficulties of retaining control during the land wars and struggle for political independence. Brian Heffernan has outlined how after these upheavals “for the conservatives, the foundation of the Irish Free State in 1922 was equivalent to the reaching of dry ground again”. The church made the most of this landing with an excessive number of priests, many ill suited to religious life, and too much emphasis on communal outward devotion and obedience rather than interior and personal spirituality.

It suited the fledgling state, reeling from civil war, to allow the church control over health and education. Unrelenting deference was expected and usually given; when elected a TD in October 1947, Seán MacBride, supposedly a radical republican, wrote to Archbishop McQuaid: “as my first act, to pay my humble respects to Your Grace and to place myself at your Grace’s disposal”. He later added he would welcome any advice “which your Grace may be good enough to give me”. McQuaid replied: “I will not hesitate to avail of your services.”

The church was continually looked to for instruction on legislation supposed to offer protection against sexual immorality. It took decades before politicians came to reject the idea that “the common good” was the same as “the Catholic good”.

A self-serving delusion reigned for decades before that; consider, for example, the response of minister for education Seán Moylan to allegations of physical abuse at Artane Industrial School in 1954: “I cannot conceive of any sadism emanating from men trained to have great devotion to a very high purpose.”

Consider also the educational curriculum and the impact in the early decades of Irish statehood of the influential educationalist Jesuit Timothy Corcoran, who stressed the corrupt nature of the child and the consequent need for severity.

Consider also the parallel subjugation of women and the range of societal collusion; the parents and communities that accepted the supposed need for incarceration and those parading piety rather than compassion who dropped women at the doors of mother-and-baby homes or turned blind eyes to misdeeds to “avoid scandal” and protect social standing. That mindset has also been underlined in reports into abuse of children; as the Murphy report put it in 2009, an “obsessive concern with secrecy and the avoidance of scandal”.

A host of power alliances and socio-moral attitudes built up over two centuries operated to protect the lie that Ireland was a beacon of Catholic and sexual purity in an otherwise pagan world. The tragic historical irony is that the obsession with avoidance of scandal facilitated ever-greater scandal. The detail of the abuse experienced by so many underlines that some of those most associated with harshly urging others to avoid “occasions of sin” were the greatest sinners of all.