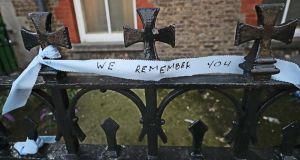 Messages left on the railings at the site of a former Magdalene laundry on Dublin’s Sean McDermott street. Photograph: Niall Carson/PA Wire

Charities that support victims of abuse have said the visit of Pope Francis to Ireland has triggered a sharp increase in the number of abuse survivors coming forward.

One in Four, a charity that offers support to survivors of sexual abuse, said it experienced a large increase in the number of people seeking help for the first time last week.

Normally, the charity receives about 25 calls a week from people coming forward about abuses they suffered for the first time. Last week, the organisation received more than 100 calls from new clients, which it said was due to the papal visit.

Deirdre Kenny, head of advocacy at One in Four, said the increase in calls was a “direct result” of media coverage and publicity around the subject of clerical abuse, ahead of the pope’s two-day visit to Ireland.

“The conversation around the nature of the cover-ups seems to have triggered a reaction in people,” Ms Kenny said. Not all of the cases of abuse survivors getting in touch with the charity related to clerical child abuse, she said.

The demographic of survivors contacting the group were “slightly older clients,” she said, many of whom were “abused in schools, or religious institutions”.

The Rape Crisis Network Ireland said one of their centres had also reported an increase in calls over the last week, and on Monday, due to the visit.

Several people contacting the network were new clients, and others were existing clients who had been experiencing distress due to the visit, a spokeswoman said.

Charities working in the area of sexual abuse anticipate the volume of clients seeking support will remain high over the coming days.

“Last week has been busy, it will be busy for the next two weeks,” Ms Kenny of One in Four said.

“After the fact, when the media coverage dies down, you will find people affected realise they still can’t sleep, then they’ll pick up the phone,” she said.