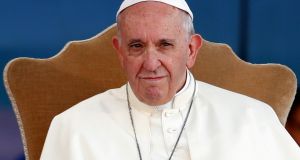 A papal visit to the North would have resulted in demonstrations from evangelical Protestants. Photograph: Reuters

As much as he wishes it were otherwise Fr Michael McGinnity doesn’t expect Pope Francis will find time to deviate from his tight two-day itinerary and make a surprise visit to Northern Ireland.

There is no disguising the disappointment among many Northern Catholics about the fact, considering the faith appears stronger over the Border. But that is not going to stop the North, or at least several thousands of its Catholics, from coming to see the pontiff.

Fr McGinnity is parish priest at St Malachy’s in central Belfast and also director of operations for the papal visit in the Down of Connor diocese, under Bishop Noel Treanor.

“Things are hectic but moving very smoothly at this stage,” he says of the planning.

A papal visit to the North would have resulted in demonstrations from some evangelical Protestants, but the main Protestant churches went as far as urging the pontiff to come.

He believes there is a “50:50 possibility” that in the next couple of years if the pope – now in his early 80s – is up to it, that he might visit Northern Ireland, perhaps as part of a trip to Britain.

The North, he points out, is a very different place to 1979 when Pope John Paul II came as near as Drogheda, and said of Northern Ireland: “Now I wish to speak to all men and women engaged in violence. I appeal to you in language of passionate pleading. On my knees I beg you to turn away from the paths of violence and to return to the ways of peace.”

It took another 15 years and many more deaths for that message to be heard but Fr McGinnity says “things have improved dramatically” since.

Amid the current Stormont paralysis, he believes the pope could still have had something important to say on cementing peace and politics.

“It would have been very much an opportunity to encourage Catholics in the North as well as the Protestant denominations to continue to work for the peace process,” he says. “I think there would have been encouragement taken from the pope coming to the North for that very reason.”

The Republic has changed dramatically since the last papal visit, as seen in referendums on permitting same sex marriage and legalising abortion passing in recent times. Those issues are still being debated in the North. There is also the fester of clerical sex abuse.

It can be difficult being a Catholic, Fr McGinnity acknowledges, but he retains hope for the church he has served as a priest for 33 years.

“There are lots of good things happening in the church across the country in spite of all the negativity and some of the dreadful scandals that the church has had to address. There are great efforts to encourage people in their faith and people are responding to that.”

One of those heading to the papal Mass in the Phoenix Park is Joseph McGowan, a retired bank director from Crumlin, Co Antrim. He is travelling with his wife Dympna and sons, Christopher (17) and John (20).

Like most Catholics, Mr McGowan is upset by the latest clerical sex abuse revelations from the US and elsewhere but he doesn’t think the church is mortally wounded.

“I would not allow the behaviour of individuals to damage my faith in God or in Jesus. I hope that always will be the case. Any organisation will let you down,” he says.

He wonders should harnessed “Catholic anger” be the best reaction to the scandals and the bureaucratic sclerosis of the church. But he believes in structured religion as it provides a necessary link “between personal belief and the gospel calling to live that belief out in community”.

Paula McKeown, who with her husband Joe, a lecturer in youth work, will be speaking at the World Meeting of Families on handing on faith in the home.

They have two children, Anna (4) and Lorcan (2½). From the Ards peninsula in Co Down, she is a former speech and language therapist who is now the director of the Living Church in Down and Connor, which puts the laity at the centre of church operations.

She speaks of “bitter disappointment” among Catholics in the North at the pope not coming over the Border, but nonetheless is looking forward to the visit.

Ms McKeown also feels that “people who are keeping the faith have a sense of hope within them” notwithstanding the scandals and the challenges.

She says clerical sex abuse “created a horrendous crisis” but lay people responded to that at local level by setting up child safeguarding committees and getting more directly involved in the church.

“We definitely feel an increase in people participating who are cognisant of the difficulties in the church and also very mindful of their desire and passion for the church to get it right. There is a sense of re-ordering that is taking place and the clergy and Bishop Treanor are the big promoters of it.”

She hopes and expects that the pope will speak about the “hurt and grief” of those who suffered abuse, and also “to his resolve about how he is trying to bring about reform as well”.