Numbers living in poverty up by 120,000 since recession began

Increase of €5 weekly in core social welfare payments called for 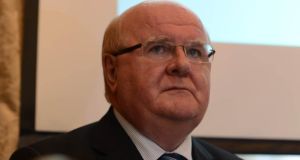 Fr Seán Healy during the press briefing on Social Justive Ireland: “These figures show a profound failure on the part of Government to protect the vulnerable during the crisis.” Photograph: Cyril Byrne/The Irish Times

More than 750,000 people in Ireland live in poverty today, an increase of 120,000 since the recession began, according to a new report from Social Justice Ireland. The report said a quarter of those in poverty were children, while as many as 16 per cent of adults in poverty were in employment.

Questioning the Government’s commitment to equality, it pointed out that the top 10 per cent of households received 24 per cent of total disposable income, while the bottom 10 per cent received just 3 per cent.

“These figures show a profound failure on the part of Government to protect the vulnerable during the crisis,” said Fr Seán Healy, director of Social Justice Ireland.

In defining poverty, Social Justice Ireland accepted the 1997 description by the National Anti-Poverty Strategy as it being a situation where people’s “income and resources (material, cultural and social) are so inadequate as to preclude them from having a standard of living that is regarded as acceptable by Irish society generally.

“As a result of inadequate income and resources, people may be excluded and marginalised from activities that are considered the norm for other people in society.”

Using Central Statistics Office figures it says the poverty line in 2014 was a disposable income of €202.21 a week for a single adult. This was “the minimum weekly disposable income (after taxes and including all benefits) that one adult needs to be outside poverty,” the document says.

These adjustments reflected the fact that as households increase in size they require more income to meet the basic standard of living implied by the poverty line, it says. A household which does not have the corresponding weekly disposable income would be classified as “at risk of poverty”.

An “immediate implication of this analysis is that most weekly social assistance rates paid to single people are €14.21 below the poverty line”.

It adds: “Fifty-eight per cent of those in poverty are not connected to the labour market (ie retired, students, caring roles, ill/disabled), consequently jobs are not the key means of reducing poverty for this group.”