Murdered archbishop Óscar Romero to be made a saint 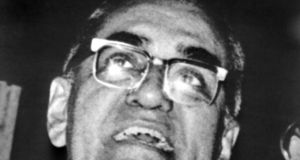 Salvadoran archbishop Óscar Romero, a champion of the poor who became a human rights icon in Latin America when he was killed by a right-wing death squad in 1980, will be made a Catholic saint.

A statement on Wednesday said Pope Francis had given final approval to several sainthood causes, including those of Romero and the late Pope Paul VI, who reigned from 1963 to 1978. Francis personally announced Pope Paul VI’s canonisation last month.

Romero’s path to sainthood had stalled under two previous popes, reflecting concerns by some that he was overly political. It was revived by Francis, who is also from Latin America and has made defence of the downtrodden a hallmark of his five-year pontificate.

Romero, who had often denounced repression and poverty in his homilies, was shot dead on March 24th, 1980, as he celebrated Mass in a hospital chapel in San Salvador, the capital of the Central American country El Salvador.

Romero’s murder was one of the most shocking of the long conflict in the country between a series of US-backed governments and leftist rebels, during which thousands were killed by right-wing and military death squads.

The civil war claimed some 75,000 lives before it ended with a peace agreement in 1992.

No one was ever brought to justice for his killing, but last year a Salvadoran judge reopened the case. The main suspect is a former soldier.

Romero was beatified, or declared a “blessed” of the Catholic Church, in 2015 after a ruling that he was a martyr killed in hatred of the faith. That ceremony in San Salvador brought together former Marxist guerrillas and their former enemies.

The pope ruled that Romero could be declared a saint after a Vatican theological and medical commission approved a miracle attributed to him.

No date was given for the sainthood ceremony, which is expected to take place this year, most likely at the Vatican. – Reuters