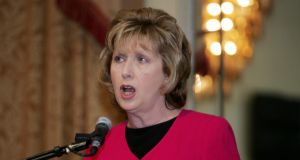 Former president Mary McAleese has described as “completely bonkers” Pope Francis’s plan to ask a synod of bishops to advise him on whether church teaching on the family should change.

She said there was “just something profoundly wrong and skewed” about asking “150 male celibates” to review the Catholic Church’s teaching on family life.

She was speaking in a public interview at UCD to mark her receipt of the university’s highest honour, the Ulysses medal.

In a wide-ranging talk, the former president - who now lives in Rome where she is studying canon law - said Pope Francis had raised expectations of change but the odds of this happening were “very poor”.

While the pope said he wanted a new role for women in the church, discussion of women priests was off the table, while other senior roles in the Vatican continue to be filled by men in a manner which lacked transparency.

“You don’t need a new theology of women, you just need to end the old boys club,” she said.

While she hoped the October synod “will be a process of real introspection and debate”, she said she had not yet moved “from hope to expectation”.

In advance of the meeting, the Vatican has circulated a questionnaire worldwide seeking feedback on pastoral issues of marriage and family.

Mrs McAleese commented: “I wrote back and said I said I’ve got a much simpler questionnaire and it’s only got one question and here it is: How many of the men who will gather to advise you as pope on the family have ever changed a baby’s nappy? I regard that as a very, very serious question.”

In the public interview with Prof Conor Gearty of the London School of Economics, Mrs McAleese also spoke of her admiration at the “stoicism and solidarity” of the Irish public after the economic crash. She said she didn’t view this response as “passive”.

Asked whether the burden of austerity had been equally shared, she said she believed a lot of elements of Irish society had taken a hit but young people who had bought their homes at the peak of the market had taken “a disproportionate hit”.

Challenging the idea that everyone got greedy during the boom, most people were simply “investing in this thing call home and family”, she said.

On the day that was in it, Ms McAleese also spoke of her interest in James Joyce and how she had “always been perplexed why he would chose a Jewish person in Dublin” as the lead character of Ulysses.

A possibility, she suggested, was that he had been influenced by “one of the big international scandals” of the late 19th century - the abduction of a six year old Jewish boy Edgardo Mortara by the Vatican where he was raised as a ward of the state.

She noted “the church has an image as a protector of children” but history shows the “treatment of Jews in Rome was appalling” right up to the 20th century.

Mrs McAleese was earlier presented with the UCD Ulysses medal in a ceremony in which four other leading legal and public figures received honorary degrees, including Prof Gearty.